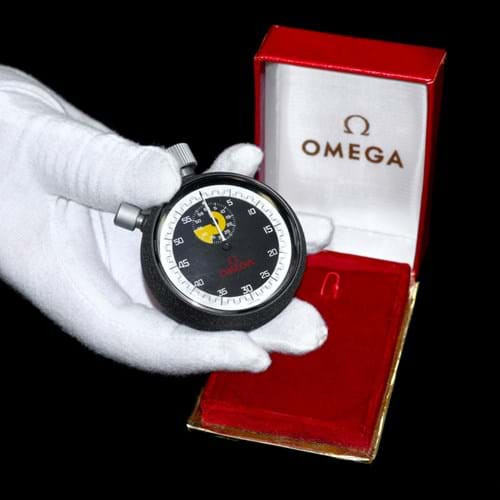 The watch was used by the Wolverhampton-born Taylor to time the fastest goal ever scored in World Cup history when he awarded a penalty after only two minutes at the Olympiastadion in Munich when West Germany’s Uli Hoeness fouled Dutch captain Johan Cruyff.

It was the first penalty to be awarded in a World Cup final and was successfully converted by Johan Neeskens.

The Dutch lead did not last long, however, as Taylor controversially awarded West Germany a penalty of their own in the 26th minute when Bernd Hölzenbein was fouled in The Netherlands penalty area and Paul Breitner converted it to equalise.

Gerd Müller then put West Germany ahead in the 43rd minute, a lead they held on to as they won 2-1 to lift the World Cup for the second time in the country’s history.

The stopwatch contains engravings, including the official 1974 World Cup logo, and Taylor’s initials.

It was entered into auction at Fellows by Taylor’s family and appeared as part of "The Luxury Watch Sale" by Fellows.

Taylor gave the stopwatch, measuring 54 millimetres in diameter, and with a mechanical, hand-wound movement, to his daughter, Jayne Willis, over 40 years ago.

The watch still works, and it comes in its original Omega box, which also contains the name of the referee.

The World Cup final was the pinnacle of Taylor’s refereeing career, which also included officiating the 1966 FA Cup final between Everton and Sheffield Wednesday and the 1971 European Cup final between Dutch side Ajax and Greece’s Panathinaikos.

Taylor served as a referee for 33 years, taking charge of more than 1,000 games, including over 100 international fixtures played in 60 countries.

Besides the 1974 FIFA World Cup in West Germany, Taylor also officiated at the 1970 tournament in Mexico.

“It is a delight to auction such a precious and significant piece of footballing history,” Steven Yambo, senior watch specialist at Fellows Auctioneers, said.

“Jack Taylor was one of the most esteemed English referees who was involved in some huge football matches, although this was certainly the biggest.

“We received multiple bids from three different bidders on this lot and I am glad that the stopwatch was sought-after.

“It is in a very good, working condition for its age and the winning bidder has acquired an exquisite and historic item.”