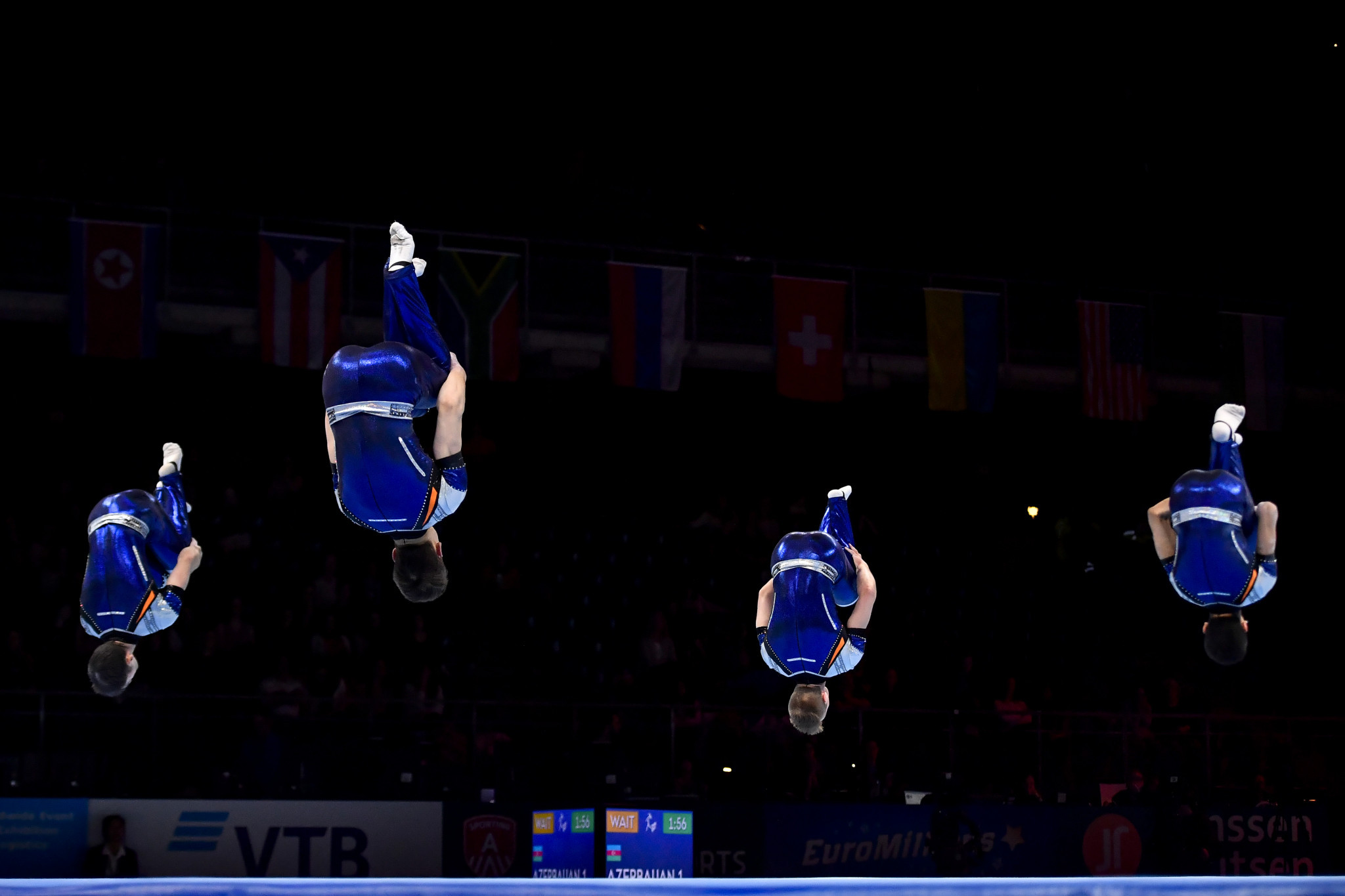 During the qualifying rounds of the International Gymnastics Federation (FIG) competition, gymnasts performed three routines - balance, dynamic and combined - with the top eight teams - one per country - in each category advancing to tomorrow and Sunday’s  (July 4) finals.

In the men’s group and men’s pairs, the RGF set the early pace.

The balance and combined exercises will take place tomorrow, but only one group per country will advance to Sunday’s final.

The RGF excellence continued courtesy of Timofei Ivanov and Maksim Karavaev, who are hoping to deliver the nation’s fifth consecutive world title in men’s pairs.

Through two routines, Ivanov and Karavaev’s excellence, including a competition-high 29.760 points for their balance routine, has withstood the challenge from Sammi Nassman and Samuel Large of Britain, currently second.

After a slow start to the day with their balance routine, an explosive dynamic performance from Belgium’s Noam Raj Patel and Robin Casse saw them move up from eighth to third.

The German pair, aged 16 and 20 respectively, held onto the lead following the dynamic exercise despite posting only the 10th-highest score in their second routine.

Viktoryia Akhotnikava and Ilya Famenkou of Belarus and Hadar Fainshtein and Meron Weissman of Israel are in close pursuit.

The RGF’s 2019 European champions in the mixed pair, Viktoria Askenova and Kirill Startsev, were 11th after their first balance routine following a mistake that cost them a 0.6-point penalty.

But they responded to to post the highest dynamic score with 28.710 points to move up to sixth place with one routine still to perform.

Viktoriia Kozlovska and Taisiia Marchenko of Ukraine followed up on their victory at April’s World Cup in Sofia by taking the lead in women’s pair after one exercise.

Behind them are Rita Ferreira and Ana Teixeira of Portugal and Emily Davis and Aubrey Rosilier of the United States, who have made a strong return following a knee injury that nearly ended Rosilier’s career.

Chasing the Portuguese are Daria Chebulanka, Sofia Polishchuk and Daria Tikhomirova of the RGF and Meshi Hurvitz, Yarin Ovadia, and Inbal Zeitounei of Israel.

Six gold medals, including one to be awarded in the team competition, are up for grabs at the Acrobatic Gymnastics World Championships, which were rescheduled from May 2020.

Finals in men’s pairs and mixed pairs will take place tomorrow evening, while women’s pairs, women’s groups and men’s groups will conclude the competition on Sunday.