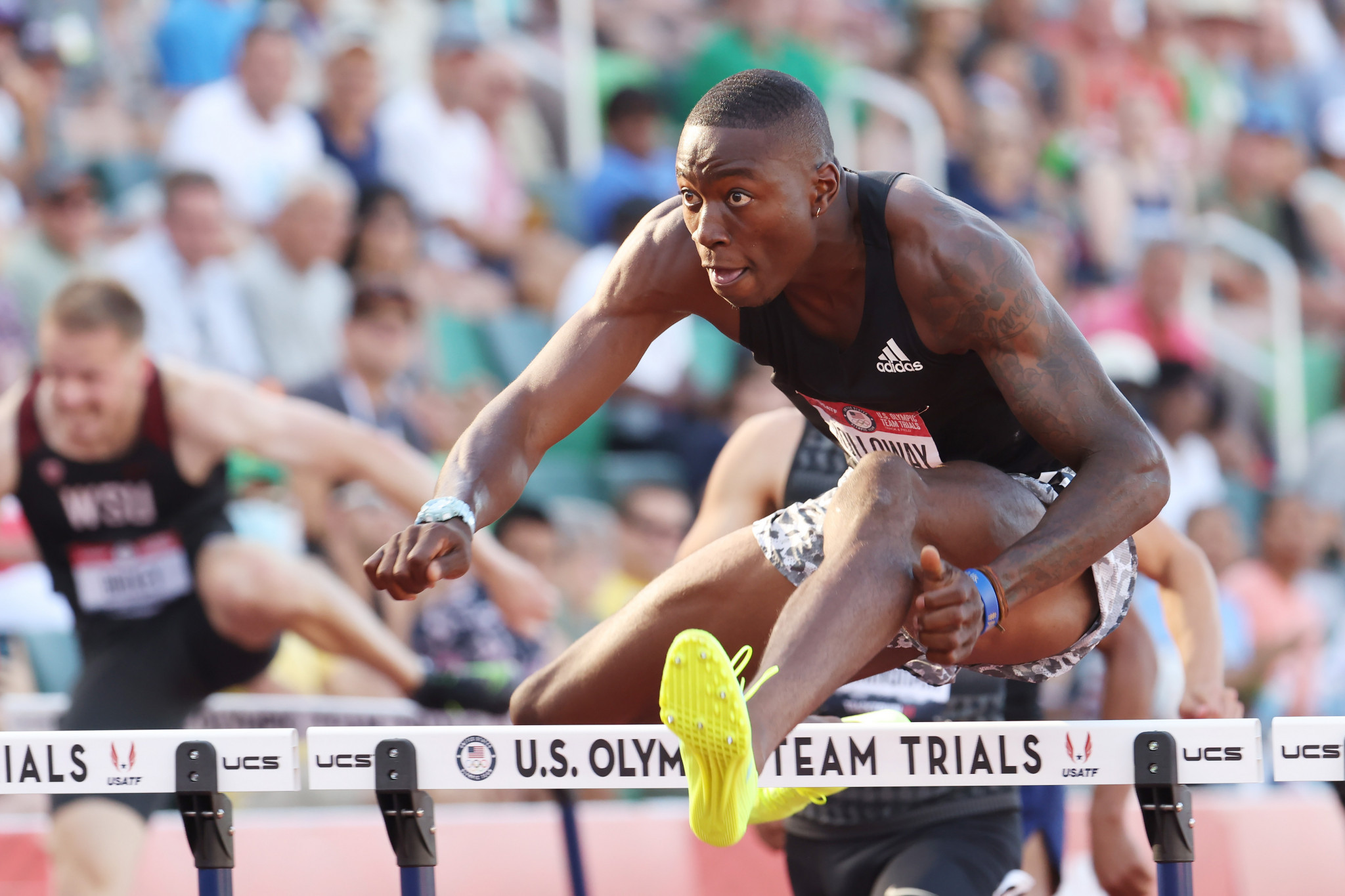 Grant Holloway and Rai Benjamin were close to setting new world records in the men's 110 metres hurdles and 400m hurdles on the seventh day of the United States Olympic Team Trials in Eugene in Oregon; as they booked their place at the Tokyo 2020 Olympics.

Holloway laid down the challenge in the semi-finals at Hayward Field, winning by a colossal four tenths of a second in 12.81sec - the second fastest time over 110m hurdles in history.

Only compatriot and London 2012 Olympic champion Aries Merritt has ran faster, when he ran 12.80 just a month after his gold medal win nine years ago.

Although he could not replicate that standard in the final, Holloway clocked a time of 12.96 to win the gold medal and confirm his spot at the Games.

Holloway is the defending world champion in the discipline, as well as the world record holder over 60m hurdles after setting a best of 7.29 in Madrid in February.

Prior to the final, Rai Benjamin also came close to a world record in the 400m hurdles, finishing more than a second ahead of the rest of the field in a new best of 46.83.

Benjamin, who has now ran three of the 10 fastest times in history, went to number two on the all-time list just behind compatriot Kevin Young.

"It hurts a little bit that it was right there and I couldn't grab it, but it's just more fuel for the fire," Benjamin told NBC afterwards.

"If I got a world record now, would I be able to maintain that level of fitness?"

Young smashed Ed Moses' nine-year record in the Olympic final at Barcelona 1992, with his 46.78 now standing for close to 29 years.

Although the field were far back, all of the top four set personal bests.

Gabrielle Thomas also went second on the all-time list in the women's 200m behind Florence Griffith-Joyner, winning in 21.61 to book her spot at the Games.

Similar to the men's 400m hurdles, the top four all set personal bests, with Jenna Prandini clocking 21.89 and Anavia Battle in third in 21.95.

Battle held off Tamara Clark - who ran 21.98 - for the final spot at the Games, while four-time Olympian and six-time gold medallist Allyson Felix was fifth.

Felix has already qualified for the Games in the women's 400m.

Brittney Reese remains one of the favourites for Olympic gold in the women's long jump, after six consistent attempts helped her to the win at the trials with a best of 7.13 metres.

Katie Nageotte was far ahead of the rest of the field in the women's pole vault, clearing 4.95m for a world lead and a personal best.

Optimistically, she went for a new world record of 5.07m, but failed all three attempts.

Morgann LeLeux also set a new personal best for second in 4.70m; while Rio 2016 silver medallist Sandi Morris survived a scare to hold onto the third in 4.60m on countback.

Olivia Gruver and London 2012 champion Jenn Suhr missed out on the Games in fourth and fifth, also clearing 4.60m.

Maggie Malone and Kara Winger confirmed their spots in the women's javelin at Tokyo 2020, with Malone throwing a best of 63.50m.

Avione Allgood-Whetstone set a new personal best of 58.94m for third, but does not have the standard.

Emily Sisson pulled away in the final five laps of the women's 10,000m to qualify for the Games in 31min 03.82sec - setting a meeting record.

Alicia Monson was close behind for third, also having the Olympic standard.

In the women's hammer throw, world champion DeAnna Price set a national record of 80.31m to qualify for the Games and also go second on the all-time list; and was joined by Brooke Andersen and Gwendolyn Berry in second and third.

Berry booked her spot at the Olympics by just five centimetres ahead of Janee Kassanavoid.