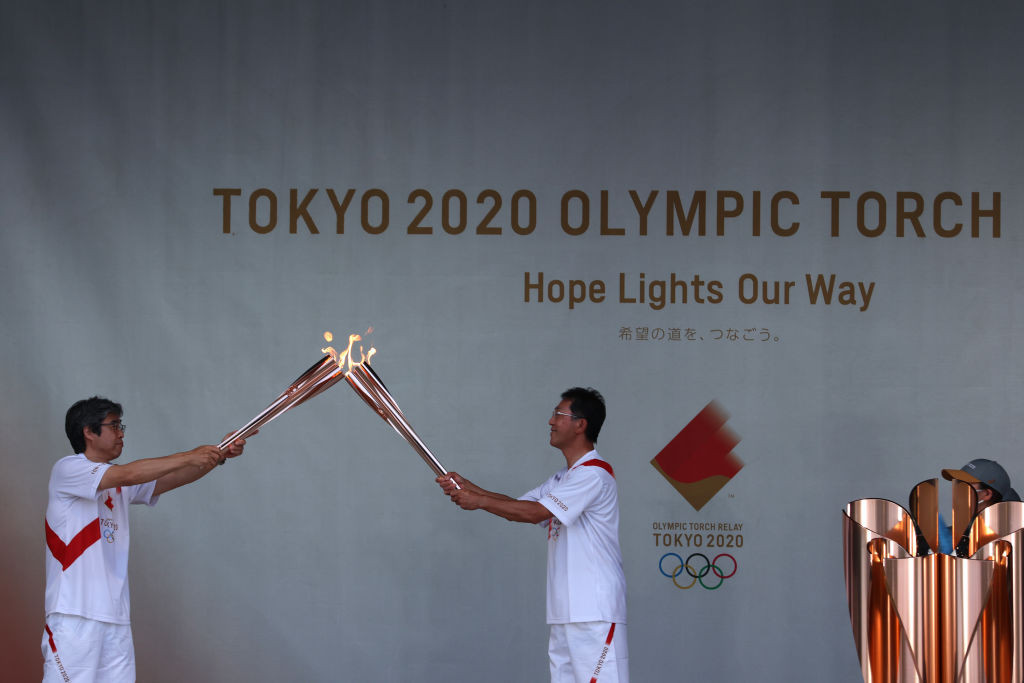 The Torch Relay for the delayed Olympic Games in Tokyo returned to public roads in Iwate and Miyagi, areas devastated by the 2011 tsunami and earthquake.

The visit to Miyagi prefecture was always likely to be poignant, but for fencer Kenichi Chida, it held additional emotional significance.

Chida had been selected for the 1980 Moscow Olympic team but Japan boycotted the Games.

"My dream of participating was blocked by the boycott," said Chida.

"When Tokyo was chosen for the Olympics I wanted to realise my dream of taking part, but as a Torchbearer.

"Although the situation is severe because of the coronavirus, my wish is that the Olympics go ahead and that the Torch Relay gives the Games a boost."

Chida later worked as a teacher and became a fencing coach.

Among his pupils was his own son Kenta, who won team silver in the foil at London 2012.

The Flame also travelled on the Sanriku railway, a line badly damaged in the 2011 disaster.

At the coastal village of Fudai, 15-year old schoolgirl Emi Kaneko carried a safety lantern onto the train.

As it travelled through Horinai station, locals raised a banner with the message: "Thank you for your assistance and cooperation for our restoration."

The train driver was 56-year-old Tomomi Yamazaki, who had worked for the railway company for 38 years and was stationmaster at Miyako Station.

"Sanriku Railway has continued running after overcoming a series of disasters, which must have encouraged the people around the world who have been watching it," said Yamazaki.

It is the second time that the Flame has travelled on the line.

In March 2020, before the decision was taken to postpone the Olympics was taken, the lantern was carried board.

Earlier in the week the Relay had returned to public roads in Iwate Prefecture after arriving from Hokkaido, where there were only truncated lighting ceremonies, even in the city of Sapporo, which will host the marathon.

She ran through an avenue of youngsters waving fans decorated with German flags in recognition that the town was a designated host city for Germany during the Games.

Keniki Kurosawa helped in the reconstruction of Ishinomaki and carried the Flame aboard a canoe.

He told Japanese television station NHK: "I did not want to lose to the tsunami.

"I applied for it.

"I do not want to lose to the tsunami!

"I want to encourage the local people and remember the victims.

"I want to be with my thoughts."

He was among many Torchbearers chosen because of their work with reconstruction efforts.

The #OlympicTorchRelay continued today through the Miyagi prefecture.

The flame paid tribute to the Watari Choritsu Arahama Junior High School, where over 300 students evacuated via the roof during the 2011 Great East Japan Earthquake ?#StrongerTogether | #HopeLightsOurWay pic.twitter.com/qwbwRVX4Ri

In Higashimatsushima, university student Hikaru Takeyama, now 20, had been in a vehicle with her family when the tsunami struck.

Their home was destroyed but she joined a scheme where locals speak about their disaster experience to help promote the region.

"I want to give something back," Takeyama told Jiji Press.

"I want to show my gratitude.

After grey skies and rain during much of the week, there was sunshine in Yuriage Harbor as Mei Kukichi took the Torch.

She had been fitted with a pacemaker after collapsing at school, which has enabled her to continue with basketball.

The final leg in Miyagi Prefecture was another "alternative" lighting ceremony at Miyagi Nohara Park Athletic Field in Sendai.

Runners carried the Flame on the athletics track at Miyagi Hohara Park stadium as drummers dressed in white, with danced beats to accompany their progress.

A group of invited guests in masks watched as Masaki Sasaki, a weightlifter who hopes to compete at Paris 2024, lit the celebration cauldron.

He was accompanied on stage by some of the other Torchbearers.

With one month until the first sporting events of the Games, the Flame is now in transit to Shizuoka, the 41st of 47 prefectures to be visited.

The Flame is scheduled to reach the Tokyo Greater Metropolitan area on July 9 and be carried through municipal districts before the opening ceremony on July 23.