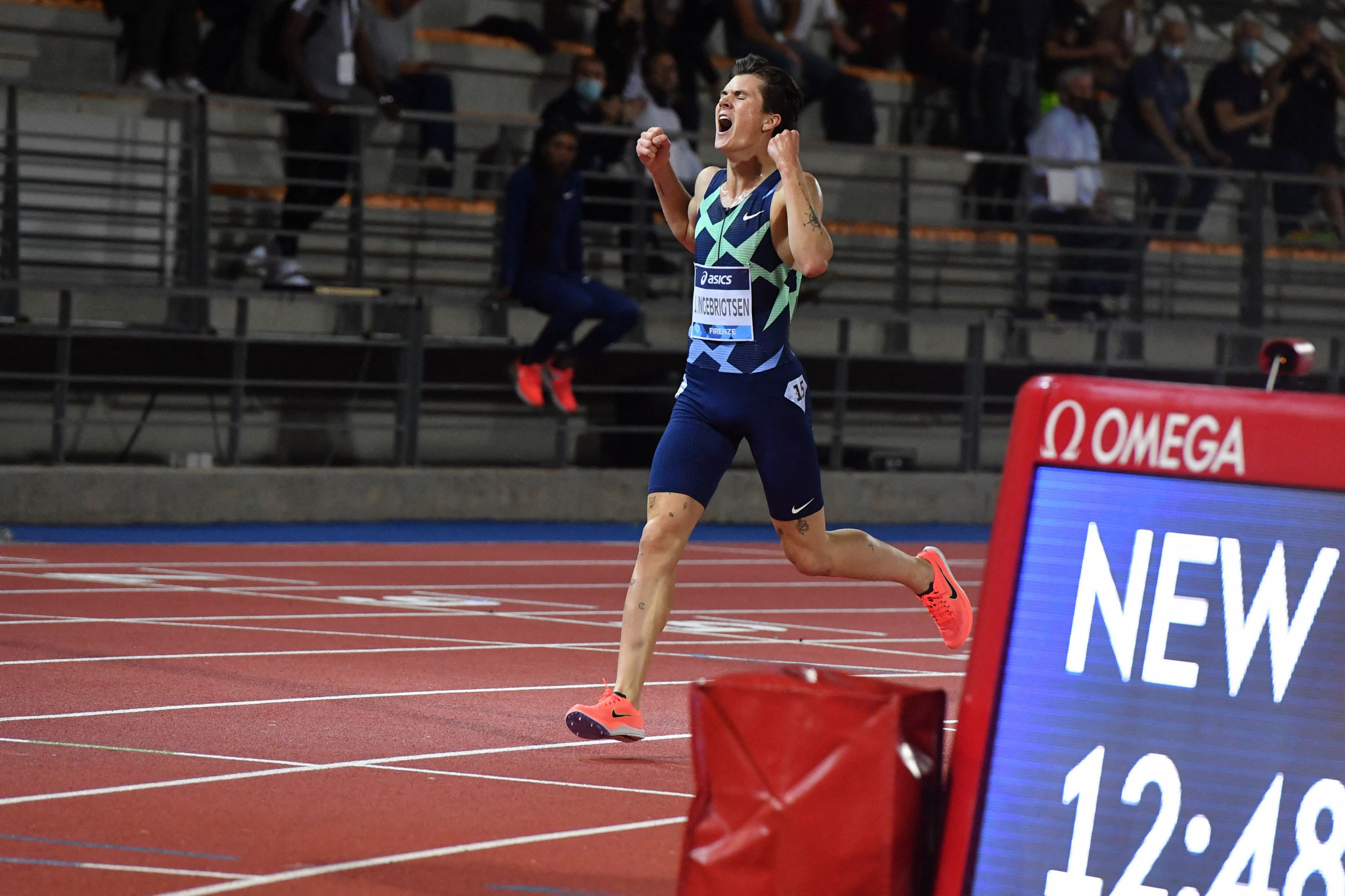 Norway’s 20-year-old Jakob Ingebrigtsen earned a landmark 5,000 metres victory at the Diamond League meeting in Florence over a field including Uganda’s world record-holder Joshua Cheptegei as he set a European record of 12min 48.45sec, the fastest run this year.

A season’s best of 12:54.69 was only enough to earn the 24-year-old Ugandan sixth place in a dazzling race that followed an equally compelling spectacle in the women’s 1500m, where world champion Sifan Hassan of The Netherlands narrowly defeated Kenya’s Olympic champion Faith Kipyegon.

Hassan, world 10,000m record-holder for two days this week before her mark was bettered by Ethiopia’s Letesenbet Gidey, won in 3:53.63, a meeting record and the fastest time run this season.

Britain’s European champion Laura Muir was third in a season’s best of 3:55.59.

What a night at #FlorenceDL!#DiamondLeague

"I thought that Faith Kipyegon was going to win.

"I am surprised about the time, even more that about my time with the world record at the 10K.

"It is not my plan to run so fast, I had hoped just to run under four minutes."

"I think it's my second-fastest time ever and just short of my British record.

"To be able to run this fast in the time leading up to the Olympics, it feels really great."

Twenty-one-year-old Femke Bol, returning to her outdoor speciality of the 400m hurdles after an indoor season in which she won 400m individual and relay gold at the European Athletics Indoor Championships in Torun, set a Dutch record of 53.44sec to finish a clear winner.

Ukraine’s Anna Ryzhykova was second in a personal best of 54.19, with Britain’s Jessica Turner third in 54.79.

"I thought that Faith Kipyeon was going to win. At 800m we were so fast, but I tried to do my best. I got the MR, but for me it is not so much about the MR. I am surprised about the time!"@SifanHassan on her meeting record in the 1500m. #FlorenceDL
? Matthew Quine pic.twitter.com/hdWFmP9WN1

Britain’s world 200m champion Dina Asher-Smith set a meeting record and a season’s best of 22.06 to finish well clear of a world-class field in which the Ivory Coast's Marie-Josée Ta Lou was second in 22.58, with Dutch double world champion Dafne Schippers fading to sixth place in 23.03.

"It was really important to do a good race here today," Asher-Smith later told the World Athletics media arm.

"Obviously it's been really hard over the past year and a bit because of the pandemic - so I'm really proud to be able to put out that kind of time, and I definitely have more in me."

Serbia’s Ivana Španović, who was unable to defend her European indoor long jump title in March because of a hamstring injury, showed she is back on form in good time as she earned victory with a the best effort of 6.56 metres in the one-off final round involving the top three performers, having cleared 6.74m earlier.

But once again the controversial format failed to deliver the reward to the jumper with the best effort of the contest as Germany’s world champion Malaika Mihambo, who cleared a season’s best of 6.82m in the third round, could only finish second with her final effort of 6.33m.

And third-placed Maryna Bekh-Romanchuk of Ukraine, who finished third after failing to record a mark in the "jump-off", had earlier reached a season’s best of 6.79m.

Qatar's world high jump champion Mutaz Barshim had a relatively disappointing night as he could only equal his season’s best of 2.30m to finish fifth in a contest won by Authorised Neutral Athlete Ilya Ivanyuk on countback after he, Brandon Starc of Australia and Italy’s Gianmarco Tamberi had all cleared 2.33m.

"It's been really hard over the past year and a bit because of the pandemic - so I'm really proud to be able to put that kind of time, and I definitely have more in me."@dinaashersmith wants more after an season's best and meeting record of 22.06.#FlorenceDL
? Matthew Quine pic.twitter.com/MLcC9FIVGq

Croatia’s 2012 and 2016 Olympic discus champion Sandra Perković laid down a big marker ahead of the Tokyo 2020 Olympics as she won with a season’s best of 68.31m that puts her third in this year’s listings, with her Cuban rival, Yaime Perez, second with 66.82m.

Women’s world pole vault champion Anzhelika Sidorova is also running into form at the crucial part of the season.

The Authorised Neutral Athlete, who has hardly competed outdoors since winning the title in Doha in 2019, won with a season’s best of 4.91m, with Iryna Zhuk of Belarus second on 4.71m and Greece’s Rio 2016 champion Katerina Stefanidi third on 4.66m.

New Zealand’s ex-shot put world champion Tom Walsh may still be looking for a sponsor but he is not lacking form.

In the men’s 110m hurdles, Jamaica’s Olympic champion Omar McLeod won in a meeting record of 13.01sec that equalled the fastest outdoor time run this year, with Britain’s Andrew Pozzi second in a season’s best of 13.25 and France’s Wilhem Belocian third in 13.31.

The Golden Gala Pietro Mennea meeting was shifted from its traditional venue at the Stadio Olimpico in Rome as it is being used for the Euro 2021 football tournament, which begins tomorrow.