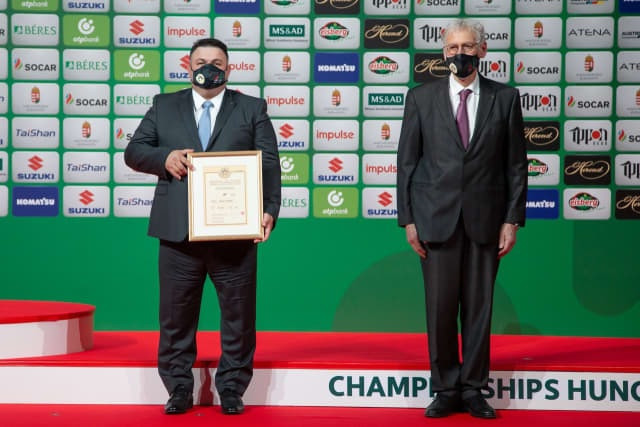 Former world champion Florin Daniel Lascau has been awarded the eighth dan - one of the sport’s highest honours - by the International Judo Federation (IJF).

Lascau claimed world under-78 kilograms gold in 1991 and is now the head referee director for the IJF.

The 52-year-old was presented with the award by IJF general secretary Jean-Luc Rougé on the podium at the World Championships in Hungarian capital Budapest.

"The achievement of the eighth dan is a big honour for me," said Lascau, who was born in Romania before going on to represent Germany.

"I am very proud to receive this award while such a special competition, the World Championships, is in full swing.

"To receive this award from the hands of Jean-Luc Rougé who was the first French world champion and one of my judo idols, is a special trophy for me.

"I want to thank my first coach, Mr Florian Velici and the President of the IJF, Mr Marius Vizer, for offering me this honour.

"I would also like to thank all my colleagues for supporting, helping and guiding me.

"Not least, I want very much to show my gratitude to my wife and my two children, who are of course all judoka."

Lascau, now the IJF's head referee director, also hailed the influence of Vizer, who has recently been re-elected as IJF President.

"I would never have arrived here without Marius Vizer," said Lascau.

"Today we are a modern Federation, which is in good health and has a roadmap, thanks to Marius Vizer.

"He is an exceptional President because he has surrounded himself with competent people and he listens, respects and encourages the points of view of his collaborators.

"That is the mark of intelligence.

"He is always looking for something new and better for judo."

A total of 16 referees also received commemorative medals from Hungarian Judo Federation President Laszlo Toth at the World Championships, due to run until Sunday (June 13).

"What really matters are values, especially those that can help society.

"Daniel has all these values."