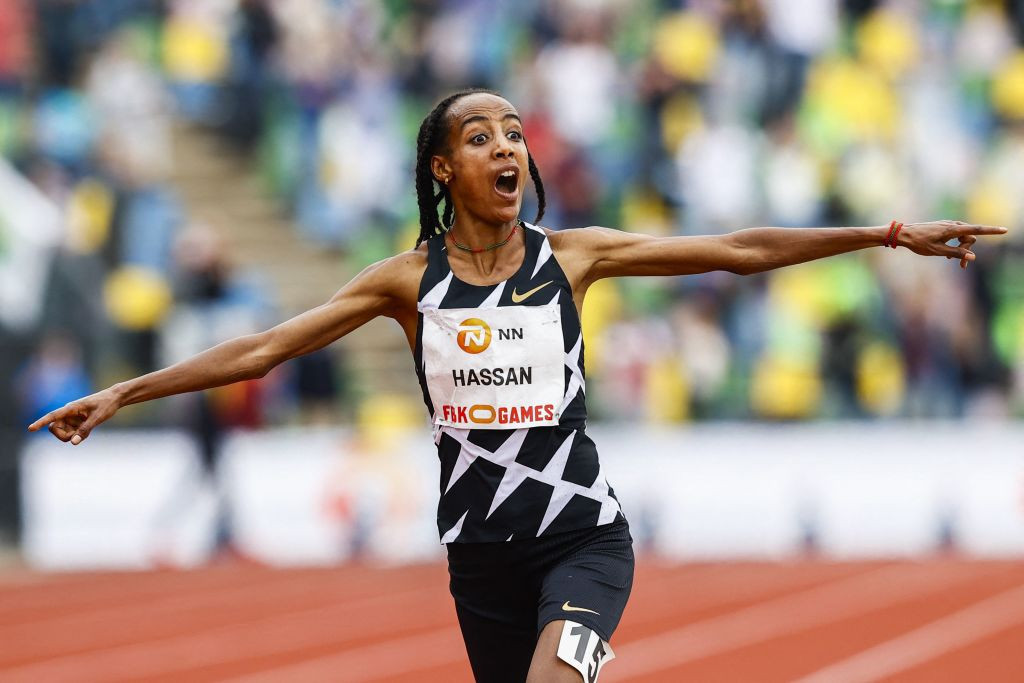 Sifan Hassan, set to run at tomorrow’s Diamond League meeting in Florence, insisted she was "happy" that the world 10,000 metres record she set in Hengelo on Sunday (June 6) had been bettered two days later on the same track by Ethiopia’s Letesenbet Gidey.

World 10,000m champion Hassan ran 29min 06.82sec at the Fanny Blankers-Koen Games to take more than 10 seconds off the mark Ethiopia’s Almaz Ayana set in winning the Rio 2016 title, but her 23-year-old rival then lowered the mark to 29:01.03 in the Ethiopian trials, also held in The Netherlands.

Speaking on the eve of a race over 1500m, for which she also holds the world title, Hassan said of the run by Gidey, who last year set the 5,000m world record: "It makes me happy.

"I want it to be an event that’s exciting.

"Letesenbet is a very good athlete, she’s a very nice athlete and I really like her.

"People think I am not happy [about losing the world record] but I am really happy about it because I want distance to be more exciting.

"I am happy she ran faster than me because it will make me work harder for the Olympics and I will enter the event more excited.

Hassan revealed that her manager had told her after her triumph in Hengelo on Sunday that Gidey would "go for the world record" at the same venue two days later.

"I think the meeting record will be in danger tomorrow"@joshuacheptege1 ahead of the 5000m at #FlorenceDL#DiamondLeague pic.twitter.com/ZpvdWVAXVR

Hassan, who is aiming for a 5,000m-10,000m double at the Tokyo 2020 Olympics, has not raced the 1500m since her victory at the World Championships in Doha in 2019, and the World Athletics website reports she is excited by the challenge of taking on Kenya’s Olympic champion Faith Kipyegon and the European champion Laura Muir of Britain over the metric mile.

Meanwhile the holder of the  men’s world 5,000m record, Joshua Cheptegei of Uganda, is full of confidence ahead of a race against a field that includes Norway’s 20-year-old European champion Jakob Ingebrigtsen.

Cheptegei is having his first run over the distance since he set the world record of 12:35.36 at the Monaco Diamond League meeting last September, and said he felt his form had improved since his season debut over 3,000m at the Golden Spike meeting in Ostrava last month.

"I am pretty sure the body is much better than in Ostrava and I can target a time of 12:40, or better."

"Shelly-Ann is absolutely amazing and I sent her a message saying it was amazing," said Asher-Smith.

"The run itself was phenomenal.

"My coach sent me a video and said, 'Look at her leg speed. That is what I’m talking about. You need to move your legs like that'."

Qatar’s world high jump champion Mutaz Barshim will seek to improve upon his 2021 best of 2.30 metres against a field that includes Italy’s European indoor gold and silver medallist Gianmarco Tamberi and this year’s leading outdoor jumper Ilya Ivanyuk, an Authorised Neutral Athlete, who has cleared 2.37m.

The Pietro Mennea Golden Gala has relocated from its traditional venue of Rome this year as the Stadio Olimpico is a host venue for this summer’s European Championship in men's football.

Tomorrow's third Diamond League meeting of the season will therefore be held at the Stadio Luigi Ridolfi in Florence.

A total of 1,000 spectators will be able to attend the event.