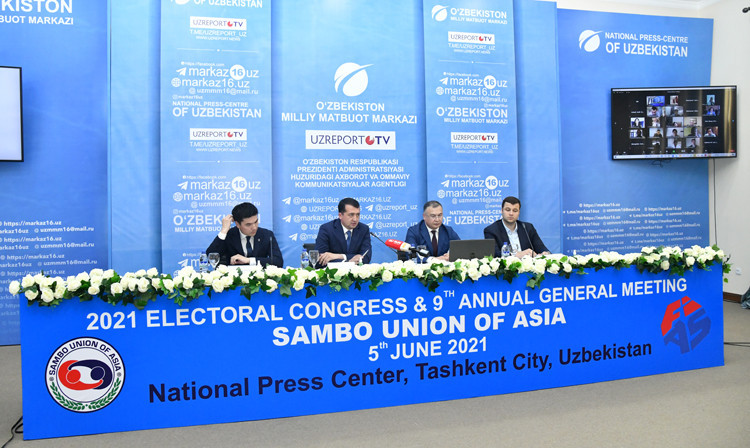 Alamzhon Mullayev was re-elected as President of the Sambo Union of Asia (SUA) before the final day of the Asian Sambo Championships in the Uzbekistan capital of Tashkent.

The regular electoral Congress of 2021 and the ninth Annual General Assembly of the SUA were held at the National Press Centre in the city in a mixed on-site and online format.

Earlier in the SUA Congress Mullayev - whose latest term will see him in office until 2025 – underlined that the current tournament is at the same time part of a bid to host the 2025 Asian Youth Games and the 2021 World SAMBO Championships.

The Russian added: "Over the past period, the Sambo Union of Asia has carried out a large and successful work to include this sport in the programme of the Asian Indoor and Martial Arts Games in 2017 in Ashgabat, Turkmenistan and the Summer Asian Games in 2018 in Jakarta, Indonesia."

François Saad of Lebanon was re-elected as SUA secretary general and Hong Kong’s Suresh Gopi became the new first vice-president as well as being re-elected as director general of the organisation.

The Deputy Minister of Sports and Tourism of the Republic of Uzbekistan, Avazjan Karimov, and secretary general of the National Olympic Committee of Uzbekistan, Oybek Kasimov, had earlier greeted the delegates and wished them successful work, noting that the popularity of Sambo in the Republic is constantly growing.

Hosts Uzbekistan then produced a final flurry of golden performances as the Asian Sambo Championships came to a close in the Tashkent Universal Sports Palace.

Both the women’s contests also went to the hosts.

There was success for other nations in the combat sambo, however, as Tajikistan’s Bobkhon Mirzozoda took gold in the 58kg category, with silver going to Kazakhstan’s Yerkebulan Kuangaliyev and bronze to home fighter Lutfilla Saydamatov.