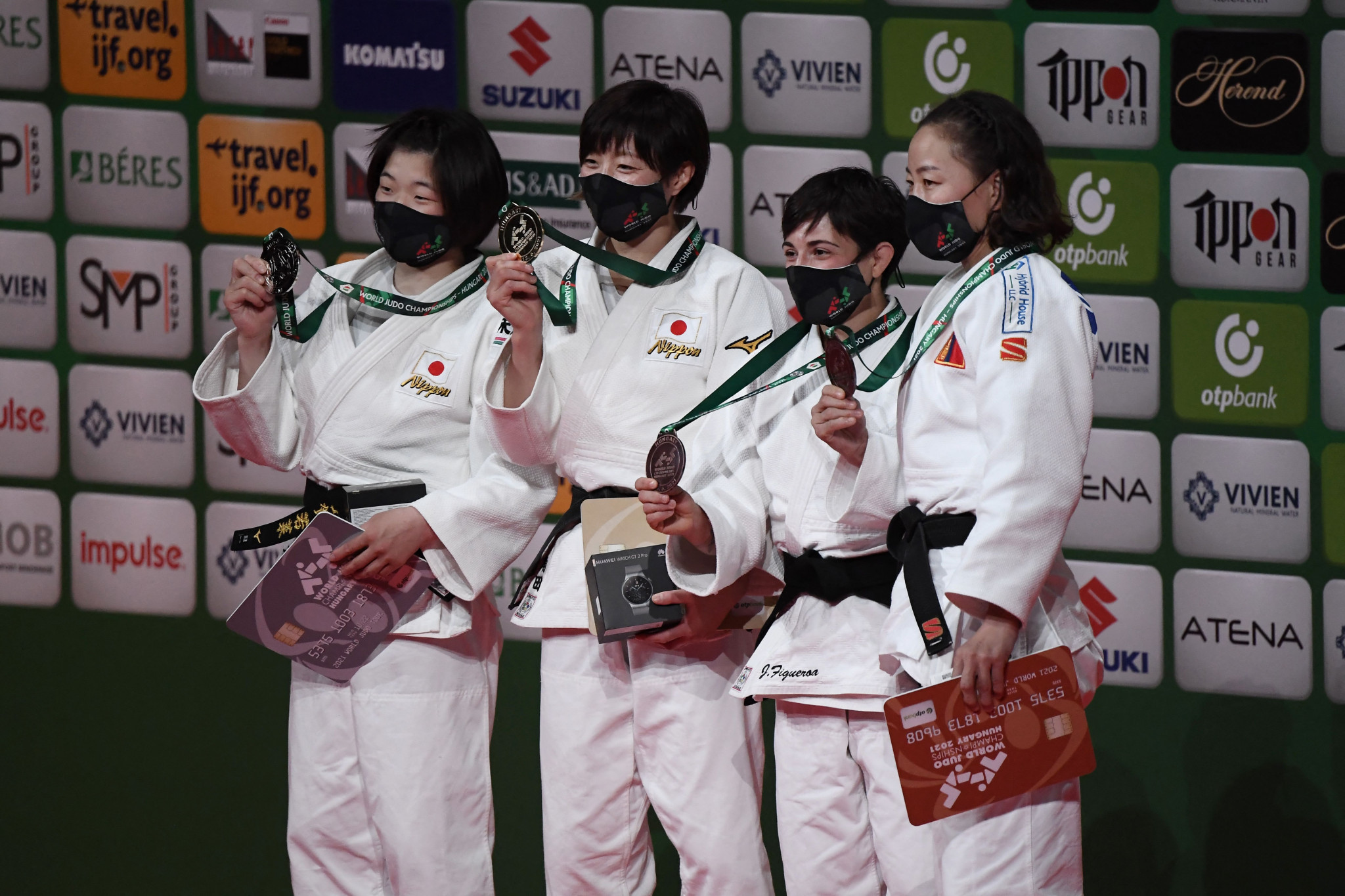 Natsumi Tsunoda overcame Wakana Koga in an all-Japanese women’s under-48 kilogram final to win gold on the opening day at the International Judo Federation (IJF) World Championships in Budapest.

Tsunoda, almost 10 years older than her opponent, used all her experience to see off Koga with two waza-aris to capture her first world title at the Papp László Budapest Sportarén in the Hungarian capital.

Yago Abuladze of Russian Olympic Committee - Russia -  also become world champion for the first time after producing a scintillating display to down Gusman Kyrgybayev of Kazakhstan in the men’s under-60kg final.

The bout took just over two minutes before it was wrapped up by Abuladze, who landed two waza-aris in quick succession to secure gold.

The two bronze medals went to Karamat Huseynov of Azerbaijan and Spaniard Francisco Garrigos after beating Magzhan Shamshadin of Kazakhstan and Walide Khyar of France respectively.

Urantsetseg Munkhbat of Mongolia and Julia Figueroa of Spain also claimed places on the podium in the women’s under-48kg division after two contrasting bronze medal matches.

Munkhbat secured bronze after eventually prevailing against overcame Distria Krasniqi of Kosovo in a lengthy, closely-fought battle, while Figueroa secured an ippon to defeat Keisy Perafan of Argentina.

A total of 46 judokas lined up for the men’s under-60 competition, while 42 entered the women’s under-48 draw.

There were no spectators in attendance as a measure to combat the spread of COVID-19.

But 3,000 are due to be in attendance tomorrow and for the rest of the Championships.

It still proved to be a thrilling first morning at the World Championships with four matches won by ippons in succession in the men’s under-60kg category as Mongolia’s Unubold Lkhagvajamts, Lenin Preciado of Ecuador, Kyrgybayev and Germany’s Moritz Plafky all made their mark.

The performance of the opening session went to Huseynov, winner of wo rounds before taking down favourite, Japan's Ryuju Nagayama, with a shock three-round victory.

Nagayama arrived in Budapest as the number one seed aiming to secure his first world title after successive bronze medals in 2019 and 2018.

But Huseynov showed no fear as he rocked him back with an early waza-ari before controlling the rest of the bout.

All eyes were now on the Azerbaijani fighter, but his hopes of a gold medal were over when he lost to Frenchman Walide Khyer following an error-strewn display.

Khyer was involved in one of the matches of the day as he battled it out with Kyrgybayev for a place in the final.

The bout was on a knife edge with both judokas receiving two penalties each as it headed into overtime to decide the winner.

It looked like Khyer had won it when the judges penalised Kyrgybayev only for the decision to be overturned, handing the Kazakh a lifeline.

Twenty seconds later, Khyer was pinned to the floor as Kyrgybayev pulled off a waza-ari to claim a stunning victory.

There was also a surprise in the women’s under-48 semi-finals as Tsunoda defeated European champion Krasniqi.

Tsunoda was sensational in the early rounds and turned on the style again, claiming an ippon to stun Krasniqi to set up an all-Japanese battle with Koga.

Competition is scheduled to continue tomorrow with the women's under-52 and men's under-66 preliminary rounds, semi-finals and finals.