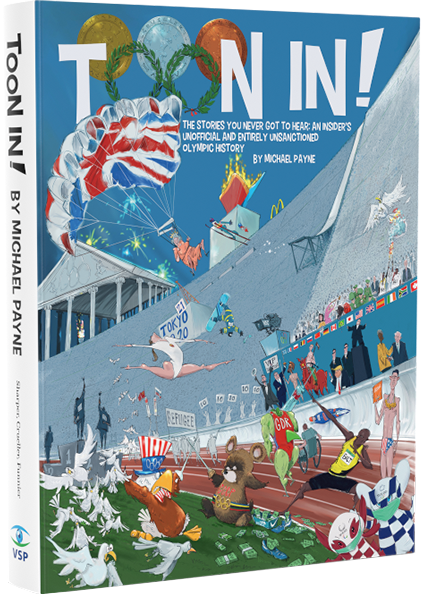 Former International Olympic Committee (IOC) marketing director Michael Payne does not produce many books, but when they arrive, they are worth waiting for.

Now, 16 years after publication of Olympic Turnaround, still required reading for anyone who wants to understand the Olympic business, the follow-up, Toon In! , has rolled off the presses.

This time, Payne’s focus is Olympic-themed cartoons, 1,200 of them, in a lavishly illustrated four-kilogram monster of a volume which will soon no doubt be gracing coffee tables in Lausanne, the Olympic capital, and beyond.

These mini-masterpieces are accompanied by a sometimes provocative 100,000-word commentary drawing on Payne’s extensive inside knowledge of the machinations and tribulations behind getting each successive edition of the ultimate sports mega-event anywhere close to take-off.

The official launch is from the Olympic Museum next Thursday (June 3), but of the extracts that have so far been made available on a website, my eye was drawn particularly to a spread, illustrated by my supremely talented old Financial Times colleague Ingram Pinn, about the Beijing Games, 2008 not 2022.

This reminded me of how the trajectory of international opinion regarding the two events could scarcely have been more different: from deep scepticism to general acceptance that the timing had been right in 2008; from hard-headed acknowledgement that the Chinese capital was the sensible choice to widespread and bitter condemnation in 2022.

After Beijing won the 2022 race by the skin of its teeth in 2015, I described it myself as "a safe pair of hands for the guardians of the Olympic brand and values"; how times have changed.

At £70 ($95/€80), Toon In! is not cheap, but all profits are to be donated to four charities: Back Up Trust, Cartooning For Peace, Peace and Sport and the Yunus Sports Hub.

A special collectors’ version of the tome is available at £175 ($250/€200), while an online auction of dedicated cartoons, closing on June 6, is in full swing.

The magnum opus is published by Vision Sports of the United Kingdom.

While Payne’s literary productivity over the years may be more akin to J.D. Salinger’s than Dame Barbara Cartland’s, gathering the best of the rich history of Olympic cartoons together under one roof, so to speak, is a monumental - and important - achievement.

"It has been a fun, complicated and time-consuming project,” Payne said.

"But I hope that in these challenging and difficult times, the book will bring people a few smiles."