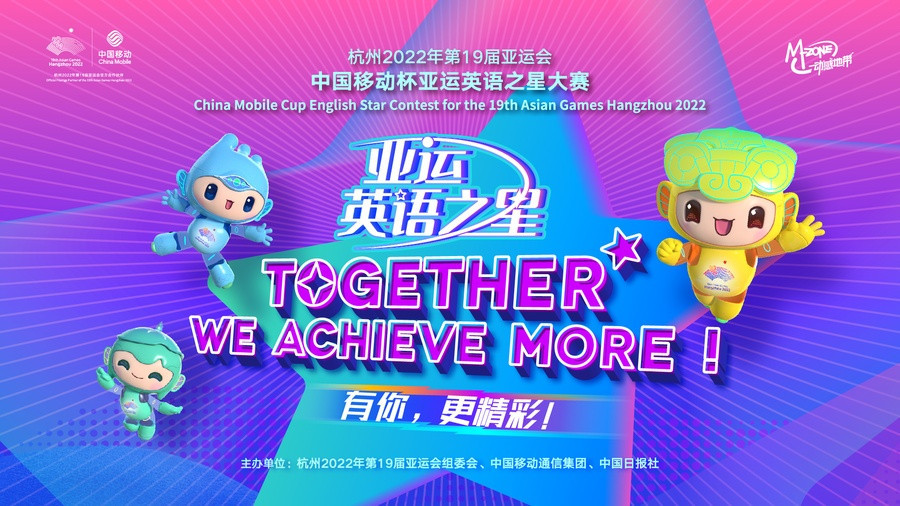 Hangzhou 2022 has launched an English speaking contest as it bids to recruit volunteers who can speak the language for next year's Asian Games.

The China Mobile Cup English Star competition will challenge entrants to give a speech in English and attend a question and answer session.

Outstanding contestants will be considered favourably when volunteers for the Asian Games are recruited, with a global search for a 52,000-strong workforce now officially launched.

An initial phase of the contest will run until August and a total of 4,000 contestants will be selected to advance to the next round in September.

A grand final is then planned for October, with the contest featuring three groups - college student, open and international.

The champion, second place and third place contestants in each of the three groups will be given the opportunity to advance to the national semi-finals of the China Daily 21st Century Cup, a national English speaking competition.

China Mobile is a prestige partner of next year's Asian Games.

"Through participation in, and joint contribution to, the Games, a fertile ground for sharing sports and cultural events with the international community could be created," said Mao Genhong, the deputy secretary general of the Hangzhou 2022 Organising Committee.

A launch event for the contest featured people sharing their experience of international exchange, while encouraging the public to take an interest in the Asian Games.

Husain Al Musallam, the director general of the Olympic Council of Asia, offered his congratulations in a video address.

People wishing to enter can do so on the official competition website here, where they will need to submit a short video.

Hangzhou 2022 will be the third time that China has hosted the Asian Games, after Beijing in 1990 and Guangzhou in 2010.

The Games are due to run from September 10 to 25 next year and more than 10,000 athletes are expected to compete.

Forty sports and various disciplines have been included on the programme.