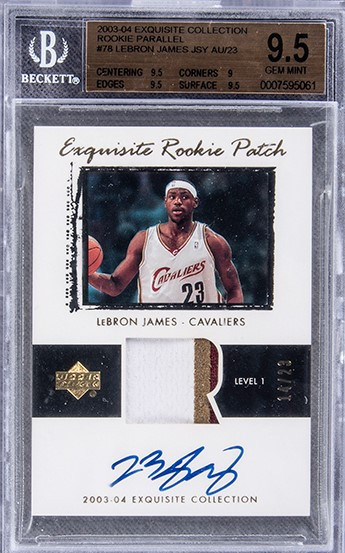 An “ultra-rare” signed rookie card for double Olympic gold medallist LeBron James has sold for $5.2 million (£3.6 million/€4.2 million) at auction, breaking the record for the most expensive basketball card ever sold.

It also equalled the record for any sports trading card, matching the amount paid in January for a 1952 rookie card for baseball great Mickey Mantle.

“At the heart of every collector in 2003 was the hope of pulling the ultra-rare LeBron James Rookie Patch Auto Parallel numbered to 23 copies,” PWCC Marketplace, who sold the card, said in a statement posted to social media.

“With so few ever becoming available and demand increasing by the day, this card is quickly becoming the crown jewel of all sports card investing.”

The buyer’s identity was not made public.

The 36-year-old James is widely considered among the greatest ever to play the game, winning four National Basketball Association (NBA) titles with Miami Heat, Cleveland Cavaliers and Los Angeles Lakers, his current club.

He has also earned NBA most valuable player honours four times and is 17-time All-Star.

James was also a member of the United States squad that won the Olympic gold medals at Beijing 2008 and London 2012, as well as winning a bronze medal at Beijing 2008.

Sports Illustrated recently reported that 23 of the 24 biggest trading card sales have taken place over the last 15 months.

Just last year, a similar and higher-graded LeBron card to the one that just sold for $5.2 million went for the relatively modest $1.85 million (£1.3 million/€1.5 million), which gives you an idea of how the market has only continued to rise.

Jesse Craig, the director of business development for PWCC Marketplace, was not surprised by the blockbuster price paid for the James card.

“This was actually in the works for a while,” he told Darren Rovell of The Action Network.

The previous record for a basketball card was set this past February when a 2018 one-of-a-kind, autographed Luka Dončić Panini National Treasures card went for $4.6 million (£3.2 million/€3.8 million) in a private sale.