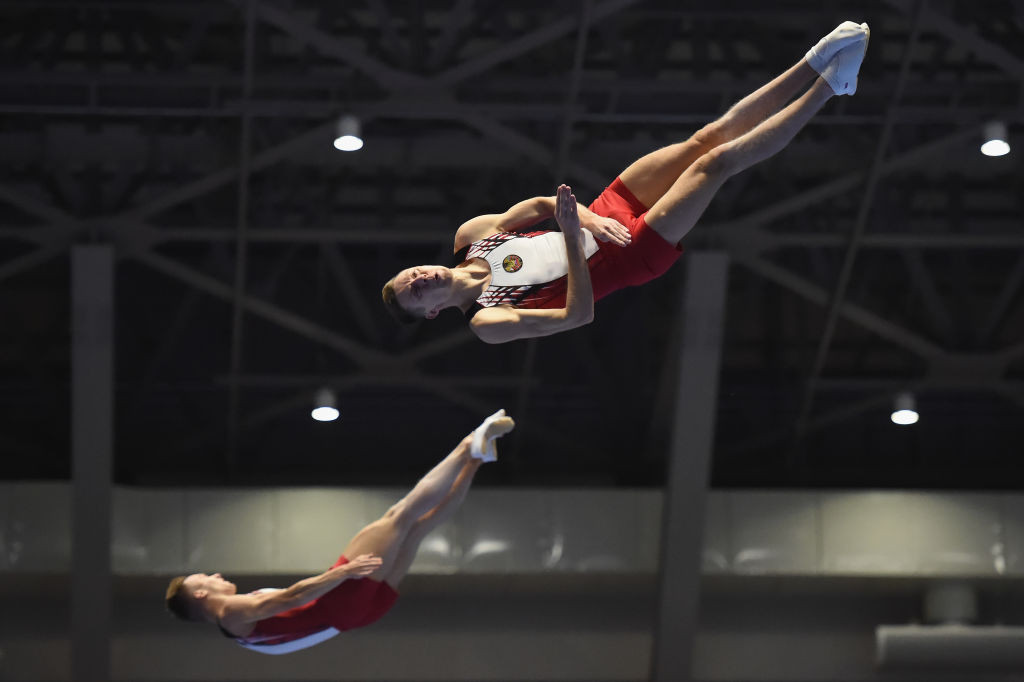 Reigning Olympic men’s individual trampoline champion Uladzislau Hancharou had to settle for silver on the concluding day of the European Gymnastics Trampoline Championships as his Belarus teammate Aleh Rabtsau beat him to the top of the podium.

Rabtsau scored 60.815 in the Sochi Ice Palace, with Hancharou totalling 60.580 and home gymnast of Russia Andrey Yudin taking bronze with 59.725.

Earlier in the day the two Belarus gymnasts combined to win the synchro men’s title with 51.990 points ahead of Portugal’s Diogo Ganchinho and Lucas Santos, who totalled 50.520, and Germany’s Fabian Vogel and Caio Laxttermann, who scored 49.930.

Overall the home nation won five of the eight senior medals on offer.

Russia won the women’s trampoline, where Iana Lebedeva won with 56.685 from two French gymnasts, Lea Labrousse, women’s individual trampoline champion at the 2019 European Games in Minsk, and Marine Jurbert, who scored 54.365 and 53.870 respectively.

Russia also took the women’s synchro title as Anna Kornetskaya and Susana Kochesok scored 48.700, with silver going to Katsiaryna Yarshova and Viktoriya Kuidan of Belarus on 47.560 and bronze to the German pair of Leonie Adam and Aileen Roesler, who totalled 45.990.

The women’s tumbling gold was claimed by Belgium’s Tachina Peeters who scored 70.800, with home gymnast Viktoria Danilenko second on 70.600 and France’s Candy Vetillard-Briere third on 67.500.

Tiago Sampaio Romao of Portugal claimed men’s silver with 75.500 and bronze went to Germany’s Daniel Schmidt on 74.300, while the women’s silver went to Sweden’s Lin Sjoeberg on 70.600 and bronze to Russia’s Dana Sadkova on 68.200.

Home gymnasts Anzhela Bladtceva and Mariia Mikhailova finished in gold and silver positions ahead of Colak with respective scores of 55.550 and 54.085, while the trampoline boys title went to Danila Kasimov on 58.415 ahead of Stanislau Yaskevich of Belarus on 57.605 and Kirill Kozlov of Russia who scored 56.120.

The junior synchro trampoline proved the province of Belarus, however, as the boys’ title was won by Daniil Pshanko and Ivan Melnikau and the girls’ gold went to Mariya Siarheyeva and Viyaleta Bardzilouskaya.

Azerbaijan’s Huseyn Abbasov and Magsud Mahsudov took boys’ silver ahead of home gymnasts Matvei Kiriushov and Dmitri Nartov, while in the girls’ event silver went to Turkey’s Colak and Sila Karakus and bronze to Russia’s Mariia Mikhailova and Anna Epifanova.

Aleksandr Butko and Alena Kalashnikova won the respective boys’ and girls’ double mini-trampoline titles, with silver and bronze in the boys’ category going to Belgium’s Brent Deklerck and Martim Lavado of Portugal, while the girls’ silver and bronze went to Russia’s Sofia Tatarova and Tuva Stjaernborg of Sweden respectively.

Dmitri Shatalov of Russia won the boys’ tumbling ahead of Axel Duriez of France and Uladzislau Liasnitski of Belarus, with his compatriot Arina Kaliandra taking the girls’ gold ahead of Alexandra Efraimoglou of Greece and home gymnast Kseniia Lutkova.

The next edition of these Championships is due to take place in the Italian city of Rimini from June 1 to 5 next year.