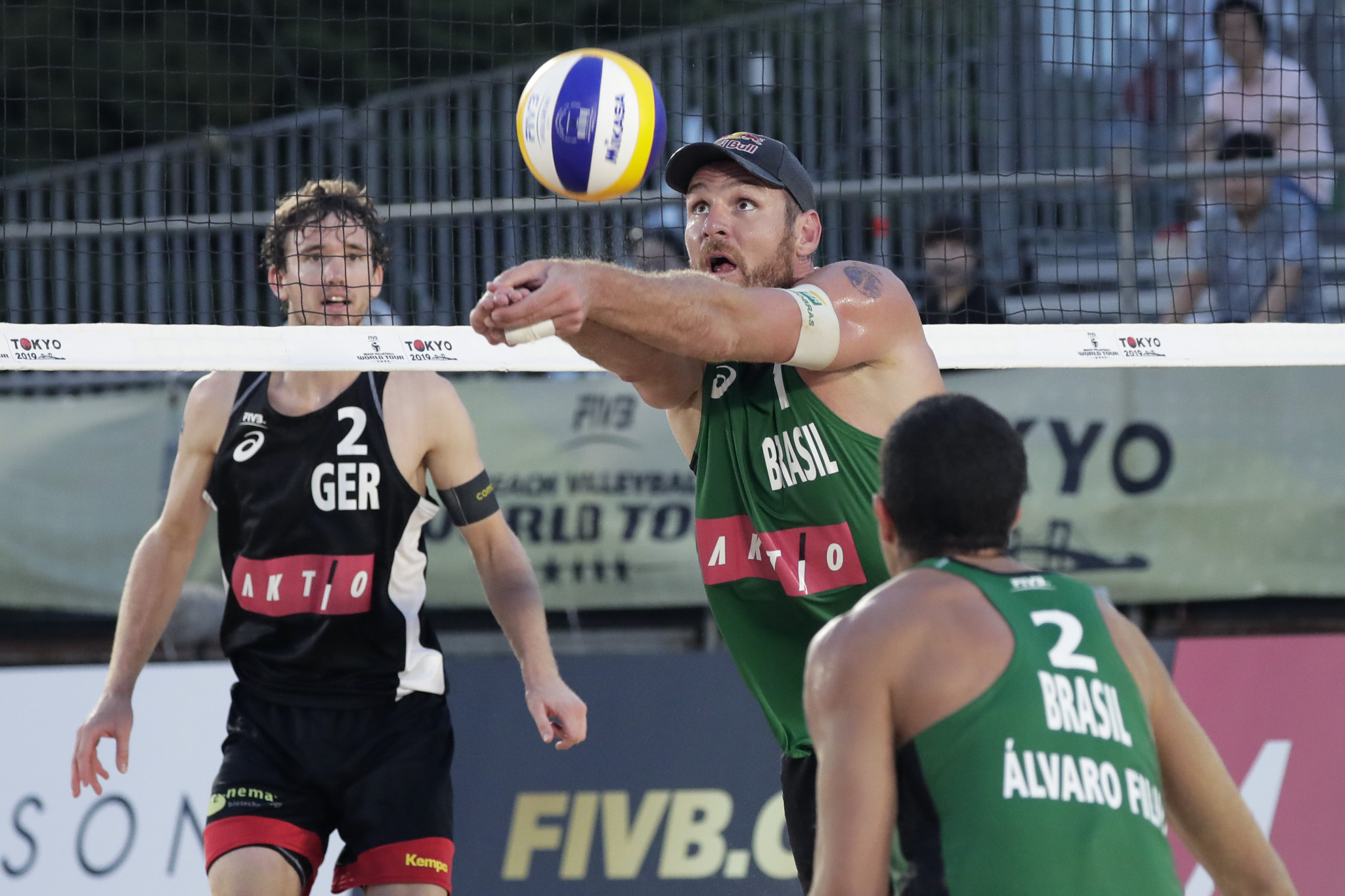 The Brazilian pair, who won bronze at the second tournament staged as part of the hub in the Mexican city, defeated Dutch pair Alexander Brouwer and Robert Meeuwsen 16-21, 22-20, 20-18 in the last 16 of the four-star event at Playa Delfines.

"I was just trying to keep my side out steady and to help Álvaro do what he does," said Alison.

"He was fantastic in the most important moments and that's the player I want him to be.

"The key was remaining focused at the end of each set.

"We felt they were under pressure and we tried to explore that as much as we could."

Cerutti and Filho now play Qatar's Cherif Samba and Ahmed Tijan, the silver medallists from the past two tournaments in Mexico who eliminated The Netherlands' Christiaan Varenhorst and Steven van de Velde 21-17, 21-18 in the last 16.

The FIVB confirmed earlier this week that Samba had been subjected to racially abusive language from a hotel staff member, who has since been sent home from the event.

Tri Bourne and Trevor Crabb won a three-set thriller against American compatriots Jake Gibb and Taylor Crabb 26-28, 21-19, 15-13 and will face Russians Konstantin Semenov and Illya Leshukov, who knocked home favourites Josue Gaxiola and Jose Rubio of Mexico with a 21-16, 18-21, 15-11 victory.

Phil Dalhausser and Nick Lucena of the United States took down Brazilians Andre Loyola and George Wanderley 22-20, 21-18 and will now meet Dutch qualifiers Stefan Boermans and Yorick de Groot, who defeated the Chaim Schalk and Theo Brunner of the US 21-15, 21-19.

Polish pair Piotr Kantor and Bartosz Losiak are also through after winning their tie 22-20, 21-15 against Latvia's Aleksandrs Samoilovs and Janis Smedins.

Their quarter-final opponents will be Italy's Adrian Carambula and Enrico Rossi, who won 21-18, 19-21, 15-13 against Germany's Nils Ehlers and Lars Fluggen.

They will play Cuban qualifiers Lidiannis Echeverria and Yanisleidis Sanchez in the next round after they eliminated Dutch veterans Sanne Keizer and Madelein Meppelink 21-16, 21-18.

The winners of the last two tournaments met in the last 16 too, with Brazilians Agatha Bednarczuk and Eduarda 'Duda' Lisboa defeating compatriots Talita Antunes and Taiana Lima 21-16, 21-15.

They now play The Netherlands' Marleen van Iersel and Pleun Ypma, who won 21-14, 16-21, 15-11 against Americans Emily Stockman and Kelley Kolinske.

World number ones Sarah Pavan and Melissa Humana-Paredes of Canada progressed with a 21-10, 12-21, 17-15 over Russia's Nadezda Makroguzova and Svetlana Kholomina, while the US' Kelly Claes and Sarah Sponcil won 21-16, 19-21, 17-15 against Germans Karla Borger and Julia Sude.