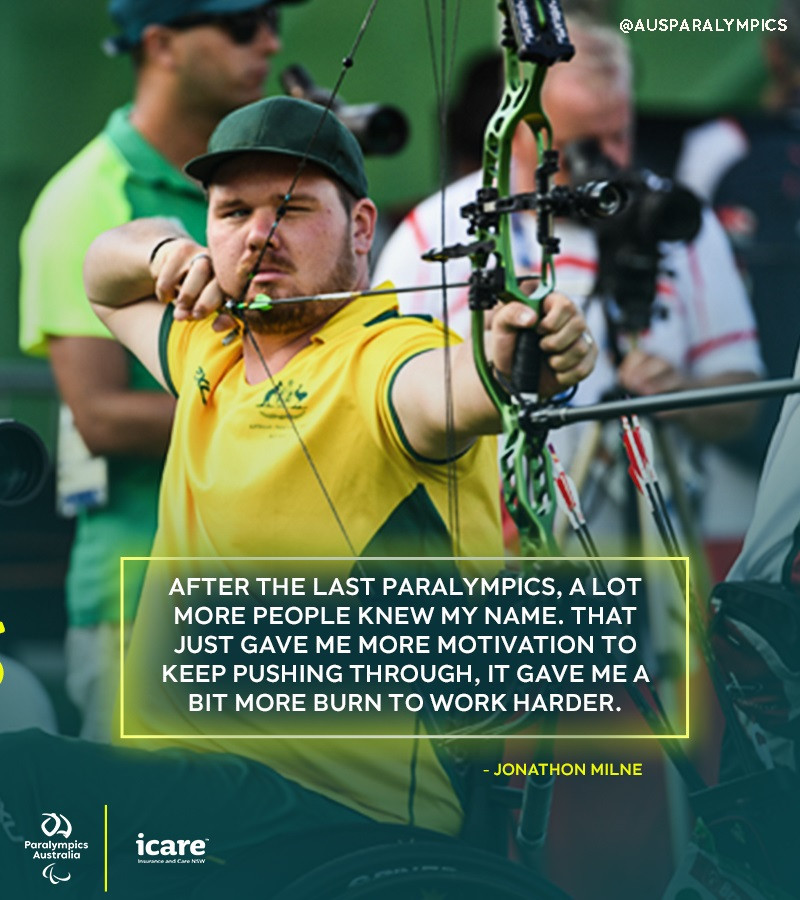 Rio 2016 Paralympic archery medallist Jonathon Milne has claimed he "got better during lockdown while most others went backwards" as he aims to secure another podium place at Tokyo 2020.

Milne has been announced as a member of the Australian Paralympic team for Tokyo where he will seek to back up the bronze medal he claimed in the men’s individual compound open in Rio de Janeiro in 2016.

It was Australia’s first podium finish in archery since the 1984 Paralympics in New York and Milne will be looking to add to that success.

While preparations for most of his competitors and team-mates have been severely disrupted by the coronavirus pandemic, Milne counts himself fortunate to have had constant access to a training space near his home.

"I was really lucky that I have a family friend who has a rather large factory unit, about four acres of undercover, up in Warragamba which is about half an hour from my place," said Milne.

"The place is almost empty, and he let me set up targets there.

"It’s indoors, perfect lighting, perfect conditions and I could just go in there and shoot for as long as I wanted.

"There were times I’d be shooting at 11pm.

"If I had stuff on during the day, I’d go up in the afternoon and shoot until late at night, lock up and go home.

"So I literally went through the whole of lockdown as one of the only people in Australia who had somewhere to shoot.

"While everyone else around the world was locked inside, couldn’t do anything, here I am being able to shoot for as many hours as I wanted everyday in perfect conditions.

"I actually got better during lockdown while most others went backwards."

Milne said claiming an historic medal at Rio 2016 had put "a bit of a target on my back" but insisted he was relishing the challenge of competing at Tokyo 2020.

"After the last Games, a lot more people knew my name," added the 35-year-old.

"Everyone wants to beat the person who’s won a Paralympic medal.

"But that just gave me more motivation to keep pushing through, it gave me a bit more burn to work harder."

"I had the pleasure of watching Jonathon compete in Rio and was inspired by how focused, calm and unflappable he was in the heat of competition," McLoughlin said.

"He is a fairly quiet guy who is dedicated to his craft, well respected by his teammates and the wider Paralympic family and I can see why he is achieving so much success.

"After such a long period of uncertainty, it is so refreshing and exciting to be able to finally announce athletes like Jonathon onto the team for Tokyo.

"This is what we have all been waiting for and I’m thrilled to be able to welcome him onto the 2020 Australian Paralympic team."