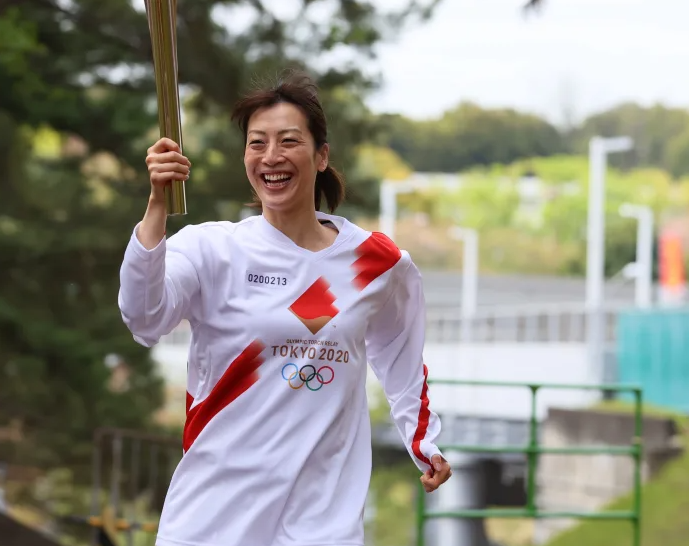 The Olympic Flame has been carried through a virtually empty Commemorative Park in Osaka Prefecture in the first major change forced on the Torch Relay by the COVID-19 pandemic.

In a statement organisers said: "In Osaka Prefecture, where the Olympic Torch Relay was scheduled to be held on 13 and 14 April, a medical state of emergency was issued by Osaka Prefecture,

"The Government has requested that people refrain from moving within Osaka Prefecture unless it is necessary or urgent.

"Due to this situation, the Torch Relay in Osaka Prefecture will be held in the Expo'70 Commemorative Park."

Osaka is the 10th of 47 Prefectures on the 121 itinerary of the Relay.

It was to have visited a number of cities in its two-day schedule, but instead a second session is due to take place in the Park tomorrow, again conducted in a controlled environment in a park built for the World Exposition which took place from March to September in 1970.

TERAKAWA Aya, a double Olympic medallist in swimming, fulfilled her dream of being a Torchbearer in her hometown Osaka. 😉#OlympicTorchRelay #HopeLightsOurWay #StrongerTogether @fina1908

Swimmer Aya Terakawa, winner of 100 metres backstroke and 4x100m medal relay bronze at London 2012, carried her Torch in front of the Tower of the Sun statue in the park.

"I am very grateful that the relay took place, no matter what the format was." Terakawa told Kyodo News.

Each runner was permitted to invite four guests to watch.

The Relay in the Park had been started by Kataoka Ainosuke, an actor in the classical Japanese dance form Kabuki.

Yesterday, in Nara Prefecture, 109-year-old Shigeko Kagawa became the oldest to carry the Flame so far.

In her early life she had been a gynaecologist.

Kagawa said, "I would never forget the joy and excitement I shared with mothers and their families as we welcomed new life into the world during these turbulent times."

Helped by her granddaughter, she used a wheelchair to complete her leg and waved to crowds as she stood to exchange the Flame in the "kiss".

She is the first of two centenarians scheduled to take part over the next month.

An amazing moment from the #OlympicTorchRelay.

Torchbearers also included Yoshiaki Haeno, a doctor from Koryo town, who had been part of the Japan Medical Association team’s rescue operation in the aftermath of the 2011 earthquake and Tsunami.

Earlier in the week, 1964 veteran Takuji Hayata was also a Torchbearer.

He became Olympic champion  on the rings and was also a member of the legendary Japanese gymnastics squad which won gold.

Now 80 years of age, he took part in the Relay in his home prefecture of Wakayama.

Junichi Kawanishi, the designer of the medals for this summer’s Games, took the Flame near the Castle Ruins in Matsusaka City, Mie Prefecture.

Organisers claim that they are the first to be produced sustainably.

They have been made using material created from unwanted electronic devices.

Three-time Olympic wrestling champion Yoshida Saori was accompanied by an escort of schoolchildren when she ran in Tsu city.

A Torch Relay ambassador, Saori had originally been scheduled to take part in the official handover in Athens over a year ago.

She handed the Flame to her mother Yukiko.