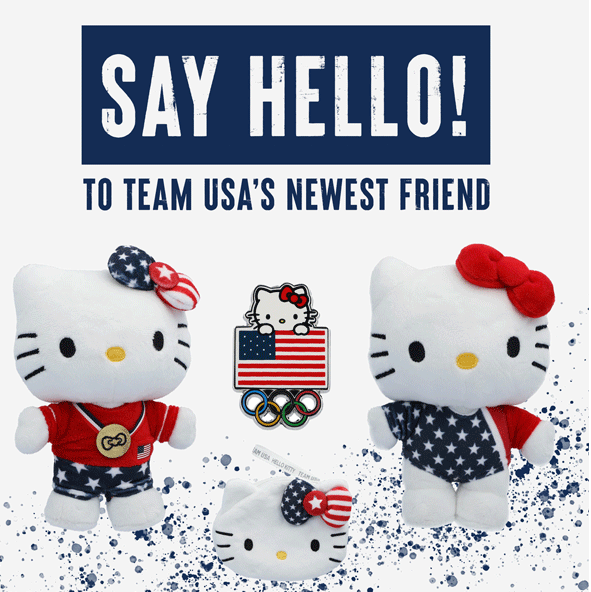 Team USA has launched a range of products featuring Hello Kitty, the popular fictional Japanese cartoon character, including plush toys and pin badges, in time for this year's rearranged Olympic and Paralympic Games in Tokyo.

It is the first merchandise to be produced since a collaboration agreement was reached in February last year between Japanese company Sanrio, the rightsholders of Hello Kitty, and the United States Olympic and Paralympic Committee.

The collection was due to be available last summer at retailers nationwide but shortly after the agreement was signed Tokyo 2020 was postponed for a year because of the coronavirus pandemic.

Hello Kitty, a perpetual third grader, has been incorporated in a hero design, standing as an iconic symbol for equal opportunity, fair play and global harmony.

She is featured on several pin badges, including taking part in surfing and gymnastics, two sports due to be part of the Olympic Games schedule to be held between July 23 and August 8.

"With such a major presence and fanbase in the US, it's an incredible privilege to commemorate our Japanese roots by emerging in Tokyo alongside Team USA," Craig Takiguchi, the chief operating officer at Sanrio, said.

"We hope that our collaboration will inspire future generations of athletes and continue to proliferate worldwide messages of friendship and kindness that the Games create."

Hello Kitty began life as a character on a coin purse in Japan in 1974, and arrived in the US two years later.

It has been popular ever since.

Other Hello Kitty-themed Olympic merchandise due for release are 12 mini figures of the young female gijinka, produced in association with Kidrobot and taking part in several sports, including boxing, fencing, judo, swimming and weightlifting.

But Hello Kitty is not even Japanese - she is British.

Sanrio decided to make Hello Kitty British because foreign countries, including Britain in particular, were trendy in Japan at the time of Hello Kitty's creation.

Sanrio already had several characters set in the US, and it wanted Hello Kitty to be different.

The name Kitty came from Lewis Carroll's Through the Looking-Glass as during a scene early in the book, Alice plays with a cat she calls Kitty.