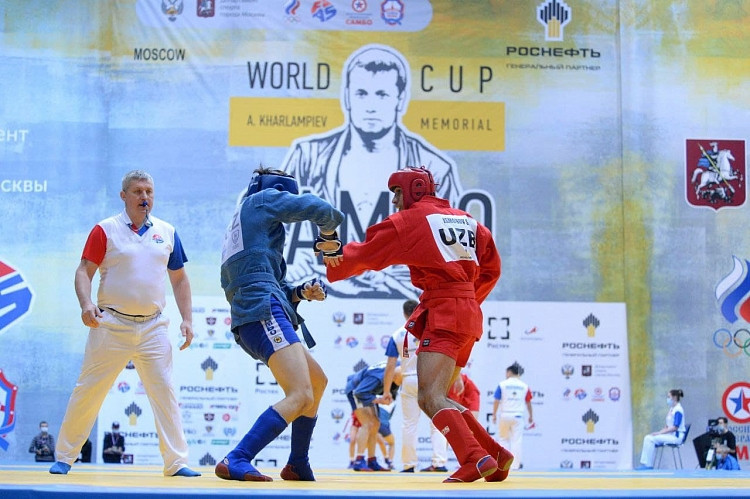 Vera Lotkova earned gold for the hosts in the 54 kilogrammes category after defeating Samara Abdumalik Kyzy of Kyrgyzstan, while the bronze medals went to Maryna Zharskaya of Belarus and Daniela Poroineanu of Romania.

Ivanov topped the podium by beating Levan Nakhutsrishvili of Georgia, with Aliaksandr Kruglik of Belarus and Kyrgyzstan's Ados Aliev earning the bronze medals.

Gorbal bested Uzbekistan's Dilshod Choriev in the final of the 98kg division, where Belarusian Aliaksei Stsepankou and Marat Baikamurov of Kazakhstan claimed bronze.

The Russian men won three of the four gold medals on offer in combat sambo on the first day of the event.

The bronze medals in the division were clinched by Tajikistan's Dzhamshed Safarov and Olzhas Tleubergenov of Kazakhstan.

Anton Mamonov continued the Russian streak by topping the 88kg standings thanks to a win against Kyrgyzstan's Elaman Genzhebaev, while Kazakhstan's Umar Yankovskiy and Manas Imarov of Kyrgyzstan did enough for bronze.

In the over 98kg category, Gadji Omarov sealed Russia's sixth gold of the day after ousting Khakimjon Ismoilov of Uzbekistan in the final.

Talgat Zhiyentaev of Kazakhstan and Brunei's Pasha Kharkhachaev were the recipients of the bronze medals.

Daniela Zhdan of Belarus and Natalia Budeanu of Moldova took the available bronze medals in the category.

Belarus' triumph came thanks to Karyna Shut, who overcame Florentina Ionescu of Romania in the final of the women's 80kg division, where the bronze medals went to Russia's Anna Balashova and Mlica Cvijic of Serbia.

The only non-Russian winner in combat sambo on day one was Uzbekistan's Bokhodir Bokiev, who beat Ay-kherel Khertek of Russia in the gold medal bout.

The event in the Russian capital is due to conclude tomorrow.