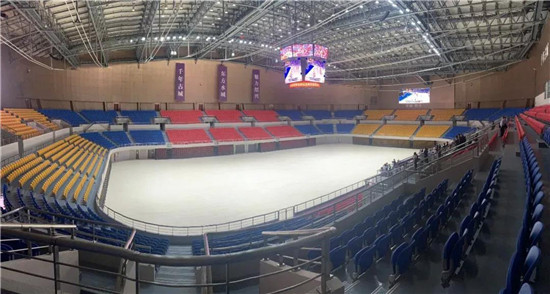 Work has been completed on the basketball venue in Shaoxing, one of the co-hosting Chinese cities for next year's 19th Asian Games, and construction is well underway on four other sites that will host baseball, rock climbing, volleyball and football training.

Shaoxing, in Zhejiang Province, it is the city that will hold the most Asian Games events besides Hangzhou.

The Shaoxing Olympic Sports Center Gymnasium, where the basketball will be held when the Games take place from September 10 to 25 next year, has become the first Asian Games project to be completed in Shaoxing.

Meanwhile the site of the Baseball Sports Culture Center is a hive of activity.

As of February 26 this year the project was classed as almost 30 per cent complete by organisers.

Work on the construction of the Yangshan Rock Climbing Center is also pressing ahead.

"It is planned to complete the foundation construction in April 2021, and to have the project finished and accepted at the end of October 2021," a Shaoxing spokesperson said.

The Rock Climbing Center will consist of a competition venue, warm-up field, indoor arena and relevant supporting facilities and is designed to have 2,100 seats.

The Gymnasium of China Textile City Sports Center, which will host volleyball, has had its interior decoration completed and the overall project is now 94 per cent complete.

"The renovations of the Gymnasium include the competition venues, facilities in spectator areas, functional rooms and dedicated systems for events, media and broadcast areas, security and transportation facilities," a spokesperson added.

There will be more than 5,000 seats for spectators.

The project is scheduled to be completed and spproved next month.

And work is also in full swing at the Shaoxing Keqiao District Jianhu Football Field that will serve as a football training ground for the Games.

"Covering a land area of 37,300 square meters and a construction area of 7,200 square meters, Jianhu Football Field will be built into a four-area training field equipped with the stand, dormitory, indoor training ground, car park and other supporting facilities," a site official confirmed.

Hangzhou 2022 reports that preparations for the Games remain on track, despite difficulties posed by the coronavrius pandemic.