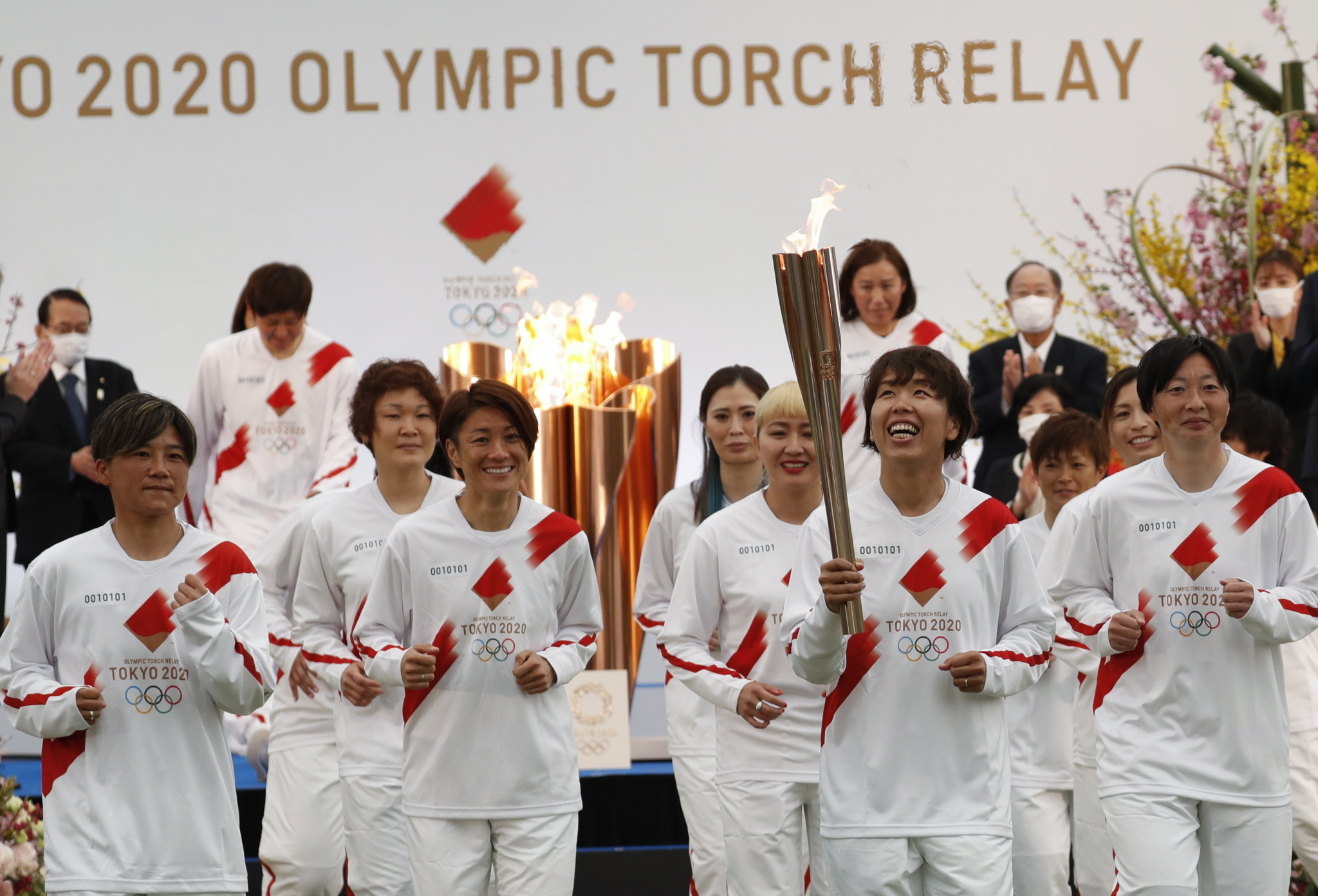 A year after it was originally scheduled to do so, the Olympic Flame has finally started its 121-day journey around Japan.

Footballer Azusa Iwashimizu led her fellow squad members known as "Nadeshiko Japan" as they carried the Flame through the precincts of the J-Village national football training centre in Fukushima in bright sunlight.

Although skipper Homare Sawa had been prevented from taking part by illness and travel restrictions meant team mates Saki Kumagai and Nahomi Kawasumi were also unable to participate, some 15 members of the victorious 2011 FIFA Women's World Cup squad were joined by coach Norio Sasaki for a moment that was highly symbolic for the Tokyo Olympics.

Earlier, Paralympic shooter Aki Taguchi and actress Satomi Ishihara, both Torch Relay ambassadors, had worn face masks as they ignited a ceremonial cauldron with a taper lit from a Flame kept alight since March 2020.

Children from local primary and junior high schools had combined to sing Hana Wa Saku (Flowers Will Bloom) and there was a dance performance from the "Hula Girls", a local troupe which had toured Japan after the 2011 earthquake.

There was also a display of traditional drumming in a short but emotional ceremony on a stage decorated with cherry blossoms.

Tokyo 2020 President Seiko Hashimoto said: "The torch of Tokyo 2020 will become a bright light for hope for Japanese citizens and citizens in the world and a light at the end of the tunnel."

International Olympic Committee President Thomas Bach offered congratulations to Tokyo 2020 and said he would "follow the Olympic Torch Relay with great excitement over the coming weeks".

"Inspired by the Olympic values of peace and solidarity, the Olympic Torch Relay will carry Tokyo 2020’s message, 'hope lights our way', across Japan and the world," Bach said.

"It will also acknowledge the challenges faced by society since last year, highlighting the importance of unity and solidarity within humankind, showing that we can only become stronger - together."

Fukushima, where the Torch Relay began, was one of the prefectures hit hard by 2011's earthquake and tsunami which left more than 15,000 people dead.

Governor Masao Uchibori said: "Here in Fukushima we have been facing serious problems and are still recovering from 2011 so the Torch Relay and the Games are very precious for us."

The ceremonies within the training centre had been closed to the public but as the Flame made its way onto the public roads, Torchbearers were joined by security escort runners who ran wearing masks.

Spectators also appeared to have heeded advice to wear protective face coverings and applaud but not cheer the runners.

It had been the first time a Tokyo Torch had burned since Rio 2016 pole vault champion Katerina Stefanidi carried it into the Panathinaiko Stadium for the official handover ceremony more than a year ago.

The journey around Greece had been suspended after unexpectedly large crowds came out to see film star Gerard Butler carry the Flame in Sparta.

Tokyo organisers have warned that if crowds are deemed to be too dense, the Relay around Japan could also be suspended.

It is scheduled to visit 47 prefectures in 121 days.

Each night the Tokyo Skytree will be illuminated to reflect its progress.

Japan's Prime Minister Yoshihide Suga did not attend the start of the Torch Relay, but speaking in Tokyo underlined the Government's commitment to holding "safe and secure" Games.

"There were no significant problems," Mutō said.

"The dense crowd situation that we have defined did not happen today and this was due to cooperation of the local residents.

"We were able to operate with no chaos.

"Today the Torch Relay has kicked a grand start.

"I feel truly happy that time has started to move.

"As long as the same operation can be conducted as today, we will have no problems even with celebrity runners."

Mutō reported that two runners scheduled to take part had not and that the Flame had gone out twice during the course of the day.

Each time it was relit from the safety lamp.

The final runner of the first day was aerobatics pilot Yoshihide Muroya.

He ran through an avenue lined by riders from the Sōma Nomaoi, a traditional festival of mounted Samurai held in the area.

The Relay will resume its journey tomorrow in Sōma, with triple Olympian volleyball player Motoko Obayashi set to be amongst the participants.

Ninety-seven Torchbearers will relay the Flame to Aizuwakamatsu on the second day of three in Fukushima.