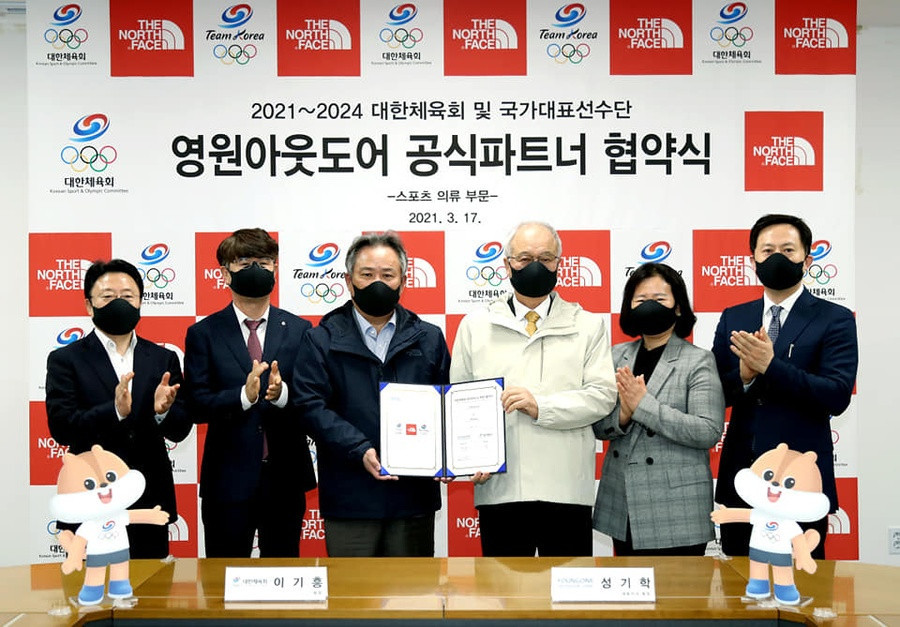 The Korean Sport and Olympic Committee (KSOC) has signed an agreement with Youngone Outdoor Corporation (YOC), which will see it provide the team with sports apparel until the end of 2024.

The agreement was signed by KSOC President Lee Kee-heung and YOC chairman and chief executive Sung Ki-hak in a ceremony at the Olympic Culture Center in Songpa-gu in capital Seoul.

YOC, which acts as a distributor for major sports brands in the South Korean market, will provide apparel from outdoor clothing company The North Face.

These uniforms will be worn at competitions such as the Olympics and Asian Games.

The company will also design uniforms for national athletes in winter and summer seasons and will have the right to create apparel using the KSOC emblem and its mascot Dali.

"I am pleased to extend the official sponsorship contract with Youngone Outdoor Corporation following the successful hosting of the Pyeongchang 2018 Winter Olympics," said KSOC President Lee.

"With this partnership, Team Korea will be able to show their best skills on the stage of international competitions."

At the Pyeongchang 2018 Winter Olympics, YOC was an official partner in sports apparel for the Games.

The two organisations have worked together at the Incheon 2014 Asian Games, the Rio 2016 Olympics and the 2018 Asian Games in Jakarta and Palembang.

"Through the unique know-how and technological innovation accumulated by Youngone Outdoor Corporation, we will continue to help Team Korea to walk with more confidence, run faster and challenge further when they train and compete," said Sung.

"They have my full support."

South Korea is due to stage the next Winter Youth Olympic Games, in Gangwon, in 2024.