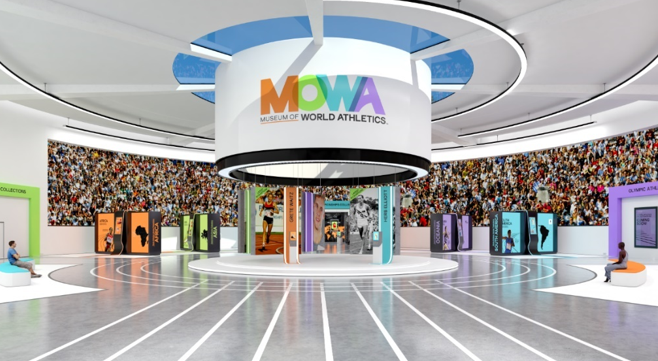 Visitors can roam the museum freely or take guided tours to interact with multiple-photograph images of more than 60 exhibits - which can be viewed in 360 degrees - and more than 400 items of supporting text, photos and video.

But Coe felt that the new project represented an important shift in the way athletics history was being treated by those charged with running the international governing body.

“If I may just add a personal note to this, I was shocked when I arrived as President of this great sport to find the cavalier way that much of what we owned to celebrate our history was being treated," Coe said.

“A lot of it was found destitute on a warehouse floor, and I was committed then, as was Chris Turner our Director of Heritage, to make sure that never again would we be so cavalier with our history.

“Because only from our history can we plot a path through to the regeneration and continued growth of our sport."

Available for free and with commentary available in both English and French, MOWA is hosted by the official World Athletics website and is accessible by following this link.

The museum gives visitors a unique online experience, highlighting key athletics champions from each continent, and celebrating the World Athletics Championships dating back to the Helsinki meet in 1983.

"We are delighted to be the first international sport federation to bring a 3D virtual sports museum to a global audience," said World Athletics President Sebastian Coe.

"Through MOWA, sport and museums fans from around the world will, without the geographical limitations of a physical location, be able to discover the fascinating history of athletics, and the amazing achievements of our athletes.

"It is particularly exciting to launch this project at a time when the pandemic has limited the ability of fans to attend sporting events or visit museums in person.

"Athletics is the most accessible and diverse sport in the world and we were keen for the museum to reflect that by making the platform accessible to everyone, no matter where you are and what device you use."

MOWA is designed to look and feel like a real building with a range of interactive options that can be accessed either by clicking on directional arrows or simply moving your device's mouse.

The MOWA opening has been marked by new donations of items owned by the 1960 Olympic 1500m champion Herb Elliott of Australia and the 1983 world marathon champion Grete Waitz of Norway.

Elliott has placed on long-term loan the Australian singlet and number he wore to triumph at the 1960 Rome Olympic Games, setting a world record which stood for almost seven years.

Two World Athletics Heritage Plaques are also being awarded, posthumously, to Elliott’s charismatic coach Percy Cerutty and to Waitz, who died of cancer in 2011, aged just 57.

MOWA features athletes from more than 30 countries and all six populated continents, which each have a section devoted to the history of athletics in their region.

World Athletics will continue to add new features and galleries regularly, beginning with an Olympic exhibition, which will open in July, before the Tokyo Olympic Games start, and an out-of-arena exhibition in the autumn.

"You will be hearing a lot about MOWA in coming weeks and months," said Chris Turner, head of the World Athletics heritage department.

"Every time you return to MOWA you will see something different, you will find a different aspect to enjoy and I hope you will come back time and time again."