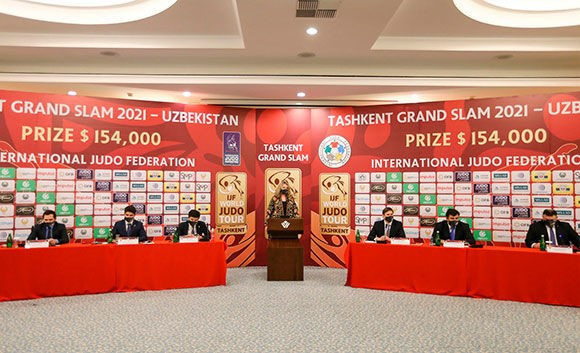 Uzbekistan's capital Tashkent is set to host its first-ever International Judo Federation (IJF) Grand Slam, with athletes from 71 nations set to compete at the next leg of the World Judo Tour.

A total of 497 judoka are entered for the event, which follows on from the Doha Masters in Qatar in January and the Tel Aviv Grand Slam in Israel in February.

Japan's Uta Abe, a double world champion and still only 20 years old, is making her return to the World Judo Tour in Tashkent, heading in as world number three and the top seed in the women's under-52 kilograms category.

Iranian-born Mongolian judoka Saeid Mollaei could have a rematch with home favourite Sharofiddin Boltaboev, after the pair met in the Tel Aviv Grand Slam final.

Boltaboev was victorious on that occasion.

Serbians Milica Nikolić and Andrea Stojadinov are both looking to gain qualification for the Tokyo 2020 Olympics in the women's under-48kg, but only one will be given the spot, if either qualifies.

The favourite in their category in Tashkent may well be Mönkhbatyn Urantsetseg of Mongolia, the world champion from 2013 and 2014 Asian Games victor.

Brazilians David Moura and Rafael Silva find themselves in a similar position in the men's over-100kg, competing for one Olympic spot, and one of their main rivals in Uzbekistan will be Japan's Kokoro Kageura, who famously ended French Olympic champion Teddy Riner's 10-year undefeated streak.

IJF World Judo Tour veteran Miklós Ungvári is seeking qualification to a fifth Olympics, with the London 2012 silver medallist still in a strong position to compete at Tokyo 2020 at the age of 40.

The Hungarian is in the men's under-73kg field.

Competition is set to start tomorrow, concluding on Sunday (March 7).