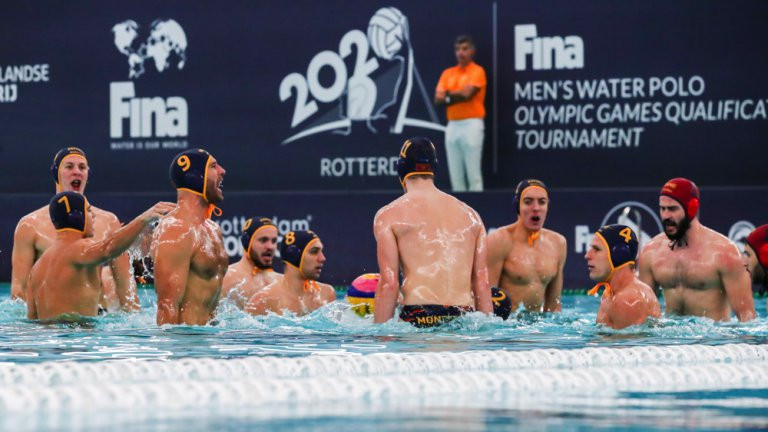 Montenegro and Croatia top their respective groups after the third day of matches in the men’s Olympic Water Polo Qualification Tournament at the Zwemcentrum Rotterdam in the Netherlands.

After a big win over Canada yesterday, Rio 2016 semi-finalists Montenegro recorded another emphatic win in the opening game on day three.

Montenegro defeated Brazil 15-5 to sit top of Group A with four points from their two games so far.

The other game in the group saw Georgia register their first win by beating Canada 14-11.

The Georgians opened up a five goal lead early in the third quarter at 8-3 and despite a Canadian fightback they kept their opponents at arms length to run out three goal winners and sit third in Group A.

Greece, who did not play today, currently sit second in the group, also with four points, and their upcoming match with Montenegro looks likely to decide the group.

In Group B, Croatia top the standings with six points from two matches, although they were made to work for their latest victory by a battling France side.

The scores were level at 6-6 early in the third period before France opened up a three goal advantage.

Despite Croatia constantly chipping away the French never relinquished their advantage and run out 13-11 winners.

Just behind Croatia in the group standings are Russia on five points from three matches.

Russia recorded a convincing 17-5 victory against a Germany side who put in a below-par performance and were comprehensively defeated.

The Netherlands sit third in the group with four points from three matches but were made to work hard for their win as they edged out Romania 9-8.

Romania goalkeeper Marius-Florian Tic produced the game of his life making 19 saves, but was unable to prevent the hosts from earning a dramatic single goal victory courtesy of a last minute winner from Jesse Koopman.

Action is scheduled to continue tomorrow with five more group contests with Montenegro and Greece meeting in a battle of the top two in Group A, and Georgia facing Brazil in the other game in the group.

In Group B three matches are scheduled with Romania up against Germany, the Netherlands facing France and a clash of the top two between group leaders Croatia and Russia.