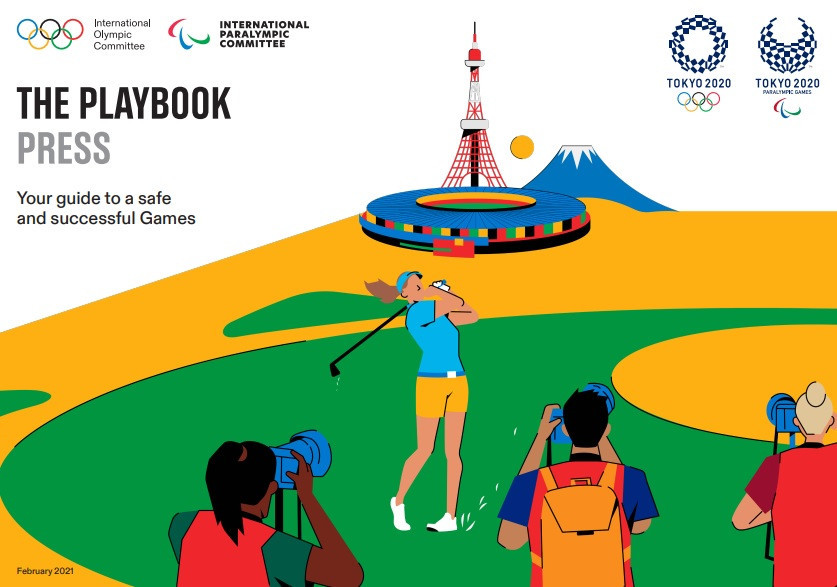 The capacity of all press areas at the Tokyo 2020 Olympic and Paralympics Games have been reduced by half as part of measures to "guarantee a safe environment" for reporters and photographers covering the event.

A booking system for daily access to competition venues is also set to be put in place, requiring every member of accredited press to make a request in advance.

This process will not apply to the Main Press Centre (MPC), although the venue will be available on a "first come first served basis".

The requirements for physical distancing at the MPC, venue media centres, press tribunes, conference rooms, mixed zones, photo positions and media lounges have resulted in a significant reduction in capacities, according to the "playbook" published by Tokyo 2020 on its website today.

The playbook states that there has been an "average loss of 50 per cent" in all press and photography areas at the Games.

Organisers have insisted they will not reduce the number of media allowed to attend the Games, despite the reduced space.

The playbooks have been created to ensure everyone is aware of their responsibilities to help the Games go ahead safely amid the coronavirus pandemic.

"Throughout the process of re-designing these Games we have taken into consideration your needs as accredited press, enabling you to carry out your role in covering the Tokyo 2020 Games," said the IOC's head of media operations Lucia Montanarella.

"Some of the measures described in this document might seem restrictive but you can be assured that they aim to allow you to do your job, in a safe environment for you, for the athletes and for the people of Japan."

With space limited for journalists, all press conferences will be available online with "dedicated platforms" used to allow for live question and answer sessions.

The daily IOC and Tokyo 2020 press briefings at the MPC and all medal press conferences are also expected to be live streamed and be archived for on-demand consumption.

Interviews may also be held at the International Broadcast Centre, MPC and the Olympic Village Plaza Mixed Zone, providing there is dedicated transport available for athletes.

Temperature checks will be conducted on entry to the locations which must "guarantee physical distancing of athletes" along with the "highest standards of sanitation and personal protection equipment".

Press will be asked to "keep physical interactions with others to a minimum" during their stay at the Games and ensure there is a "two metres distance from athletes and one metre’s distance from others".

Singing or chanting when supporting athletes have been banned, with press instead asked to clap.

They will also be prevented from using public transport "unless given permission" and be asked to practice good hygiene including hand washing and wearing a face mask throughout.

The press - like athletes and International Federation and technical officials - have also been banned from visiting tourist areas, shops, restaurant or bars and gyms.

The press will need to complete an "activity plan" for the first 14 days of their stay in Japan which will be sent to the Japanese authorities.

Press are also set to be "regularly" tested for COVID-19, including before they travel to Japan, on arrival in the country, during the Games and possibly prior to their return home.

Those who test positive could be "isolated in a Government-approved facility", according to the playbook.

Asking participants to install Japan's COCOA and health reporting mobile phone applications is among the other rules.

Every press organisation will be required to appoint a COVID-19 liaison officer who be responsible for ensuring their colleagues understand and follows the rules.

But the playbook admits it has yet to consider how this will work for "smaller organisations and freelancers".

"We trust that the measures laid out will mitigate any risks and impacts involved in participating in the Games, and we fully count on your support to comply with the," the playbook read.

"However, despite all care taken, risks and impacts may not be fully eliminated, and therefore you agree to attend the Olympic and Paralympic Games at your own risk."

"Repeated or serious failures to comply with these rules may result in the withdrawal of your accreditation and right to participate in the Olympic and Paralympic Games," the document adds.

The playbooks are due to be updated in April, with the final versions expected in June.

The version for the press can be read in full here