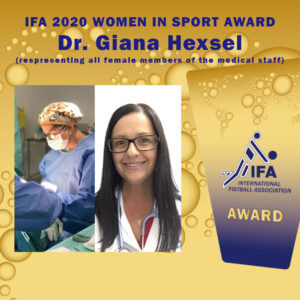 The International Fistball Association (IFA) has crowned winners of its 2020 awards during a virtual ceremony, with United Through Sports (UTS) President Stephan Fox among them.

The IFA Awards were launched in 2019, and the latest edition included honours for sport welfare, media work and a lifetime achievement award.

Fox and UTS chief executive Julia Govinden received the IFA 2020 Sport for Good Award due to their organisation of the United Through Sports World Virtual Youth Festival.

It was held online because of the coronavirus pandemic, with some in-person elements able to go ahead in Thailand.

Giana Hexsel, a doctor who chairs the IFA Medical Commission, was given the Women in Sport Award.

"Sometimes, you just have to say thank you," IFA President Jörn Verleger said.

"Thank you to all those who still have the biggest part to play in the current COVID-19 crisis in care and hospital missions - women who are there to help day and night.

"Doctor Giana Hexsel, who is doing an outstanding job not only within the fistball family as chairwoman of the Medical Commission, but also in their professional life working as a doctor in a hospital.

"For her and many other female sportswomen, who are involved in the medical and health sector worldwide, this is a sign of honour to all of the staff members who work for our health so hard."

Rahel Schreiber and Swiss Faustball were winners of the Activity Award for their Fistball at Home initiative.

Schreiber was chair of the Swiss Faustball Education Commission when the initiative was launched in response to the pandemic.

Within five weeks, 27 fistball players - including current and former national team players - had produced instructional videos with training exercises for people to replicate at home.

The IFA MEDIA AWARD 2020 goes to Fistball Australia. Since August 2020 Fistball Australia has produced 10 editions of The Fist, The Whole Fist And Nothing But The Fist, So Help Me Pod with a total of more than 15 hours of content. #wearefistball pic.twitter.com/FONkqNgijO

The Fistball Federation of Australia was given the Media Award for its podcast The Fist, the Whole Fist and Nothing but the Fist, So Help Me Pod.

Since August, Fistball Australia has produced 10 episodes of the podcast, representing more than 15 hours of content.

Finally, Art Jesswein from the Wisconsin Fistball Association in the United States was given the IFA Lifetime Award for their service to the sport.

The 88-year-old first saw the sport as an American soldier in Germany in 1956 and 1957 at the Bavarian Junior Fistball Championships.

On returning to the US, Jesswein joined the Deutsche Athletic Club in Milwaukee, where the sport had been played since the 1920s.

In 1963, Jesswein and friends started practising regularly every Sunday and two years later a Milwaukee league and the Wisconsin Fistball Association were founded.

In 1999, Jesswein was the head of delegation for the newly-formed US national team when the team competed for the first time at the World Championships, held in Switzerland.