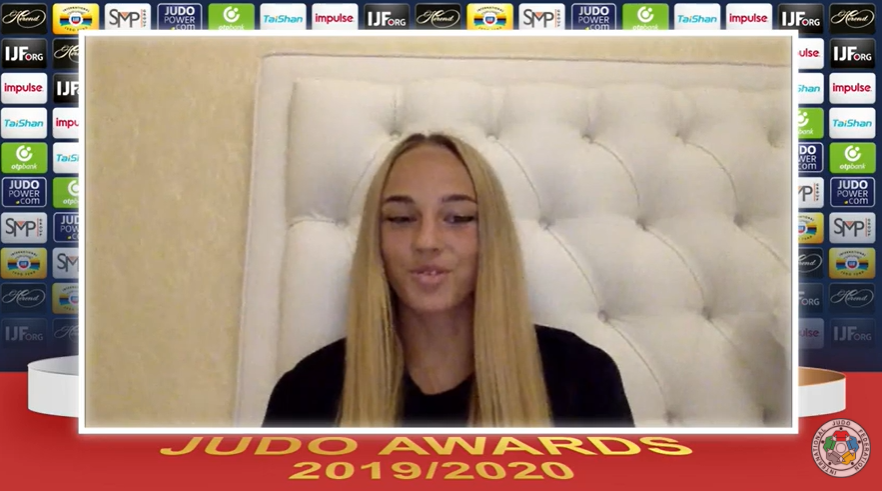 Lukhumi Chkhvimiani of Georgia and Ukraine’s Daria Bilodid were named as respective male and female judoka of the year for 2019-2020 at the International Judo Federation Awards, which concluded today’s virtual and inaugural JudoFest event.

Chkhvimiani had a stellar 2019 in the extra-lightweight under-60 kilograms category, winning the world title in Tokyo and the European and European Games titles in Minsk.

Bilodid, who turned 20 on October 10, successfully defended her extra-lightweight under-48kg world title in Tokyo in 2019 - having become the youngest-ever world champion the previous year at the age of 17.

She also won European and European Games gold in Minsk and took gold at the Paris Grand Slam earlier this year.

Bilodid told JudoFest that she was hoping to make her 2021 debut at the opening World Judo Tour event in Doha from January 11 to 13.

"I hope I will come to Qatar," she said.

A special award went to Argentina’s Rio 2016 under-48kg gold medallist Paula Pareto, who earned a degree in medicine from the University of Buenos Aires in 2014, for her life-saving frontline work during the coronavirus pandemic.

Georgia figured again in the ceremony as the Rising Star Award went to Tato Grigalashvili, the 21-year-old under-81kg fighter who earned bronze at the 2019 Summer Universiade in Naples and followed that up by winning the European title in Prague last month.

The award for best ippon went to Israel’s 2019 world under-81kg champion Sagi Muki for his hip-driven final flourish that earned him victory in front of his own fans at the Tel Aviv Grand Prix last year.

The four other contenders for the female award were Akira Sone of Japan, who won world gold in Tokyo in the over-78kg and mixed team events, Japan’s Uta Abe, the 2019 world under-52kg champion, Canada’s Christa Deguchi, the 2019 world and Pan American champion in the under-57kg class, and Clarisse Agbegnenou of France, world, European and European Games champion at under-63kg in 2019, and European champion again this year.

The award for coaching achievement went to Kōsei Inoue of Japan.

The Judo for Children Award went to Brazil’s Flávio Canto, Olympic bronze medallist at under-81kg at the 2004 Athens Olympics, who has worked for 20 years teaching children in his native Rio de Janeiro through the Instituto Reação.

The National Federations Sponsor Project Award went to the German Judo Federation for its Judo For All project.

The Judo for Peace Award was sent to the Judo for fred scheme that has been teaching children in Afghanistan for the last 18 years, organised out of Norway.

In introducing the awards, IJF President Marius Vizer commented: "JudoFest has celebrated judo around the world.

"This event demonstrates that we are more than a sport community, we are a family, a movement and a cultural force that made us stronger and more united this year.

"Today you have heard athletes share their experience preparing for next year, how the judo family has led the way for other sports to organise events safely during the pandemic, and how judo can be  used as a tool to reconstruct."