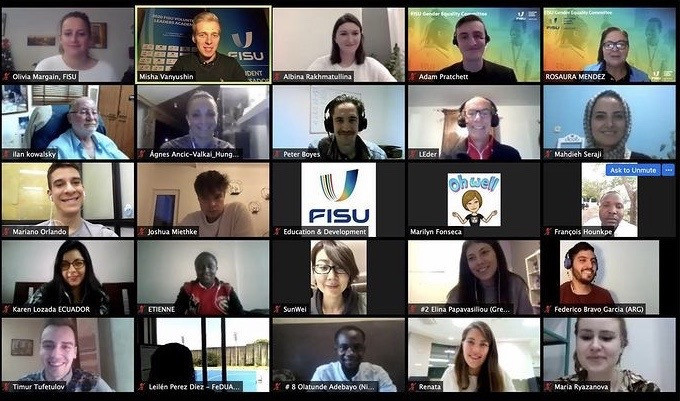 The International University Sports Federation (FISU) Gender Equality Committee has held a webinar with FISU Student Ambassadors in a bid to better educate them on gender balance and equality.

FISU first vice-president Leonz Eder began the webinar, addressing the need for young people to be at the forefront of strengthening gender equality.

"Let me first say, I am very impressed by the work of the FISU Ambassadors - you are the leaders of tomorrow," Eder said.

"You are the ones that will not only take over FISU and university sport, but also the politics and economics of sport as well."

The webinar was then led by Rosaura Mendez and Adam Pratchett, chair and vice-chair of the FISU Gender Equality Committee.

"Sport is a social phenomenon and is limited by different scenarios, and I would like to address the awareness of gender equality where we have already seen some developments," said Mendez.

"Historically, FISU has been a pioneer in the promotion of gender equality.

"At FISU, we have a very fertile field for this topic and have ability to continue leading the way with different actions around gender equality into society.

"The only way we can achieve this is if we work together as a team."

Pratchett then led panel discussions on three major topics, with the first examining why gender equality is important.

The others looked at the current work the Gender Equality Committee and how to achieve gender equality.

Pratchett also addressed that in some scenarios, gender equality projects during the COVID-19 pandemic have been treated like add-ons rather than core to university sport.

The vice-chair also underlined the importance of engagement worldwide.

It is hoped that FISU Student Ambassadors will be able to work to strengthen gender equality within university sport in their respective countries.