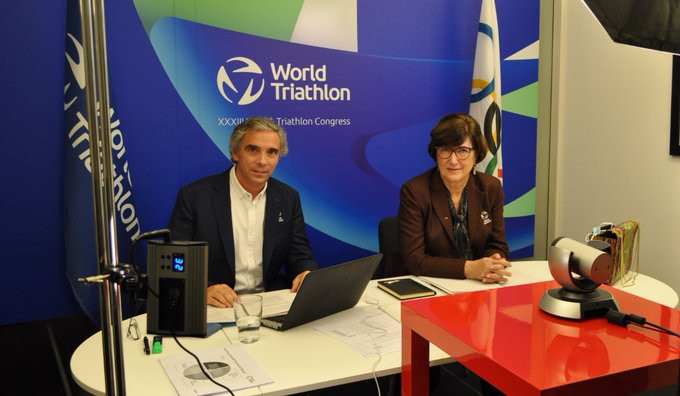 Marisol Casado has been elected to serve a fourth term as President of World Triathlon after seeing off challenger Mads Freund in a virtual vote at the organisation’s Congress.

Casado will remain a member of the International Olympic Committee (IOC) following an 86 votes to 43 victory, which will keep her at the helm of World Triathlon until at least 2024.

The Spaniard, who has led World Triathlon since 2008 and is the only female President of a Summer Olympic International Federation, said she had "no words" after the result was announced.

"I am delighted to receive this vote of confidence from our members that is an acknowledgment of all the hard work we have been doing to ensure triathlon’s rightful place among the most popular and fastest growing sports in the world," Casado said.

"This past week has shown that the solidarity and integrity of our organisation, our National Federations, our committee and commission members and our athletes continues to define us.

"I know that Mads Freund shares my passion for our sport and I promise to take on board the points that his candidacy raised as well as everything that has come out of the discussions with National Federations and Continental Confederations.

"Working with the new Executive Board, we are ready to make World Triathlon even stronger."

In her five-minute speech to the Congress before the vote, Casado promised to expand the triathlon calendar and increase promotion and investment in events, ranging from local to international level.

She also vowed to use her status within world sport - she has been an IOC member since 2010 - to "increase the presence" of triathlon at multi-sport events.

"The future that I seek is bright, although challenging, and I want to face it with all of you," said Casado.

Freund, the head of Triathlon Denmark, claimed in his address that World Triathlon "has not been heading down a good road for some time" as he repeated his criticisms of Casado's leadership.

Casado, who can serve as World Triathlon President until 2028 after a 12-year term limit was introduced in 2016, had been praised by IOC sports director Kit McConnell before he delivered his report to the membership.

In an effective endorsement of Casado, McConnell said the 64-year-old had been an "incredible driving force for gender equality" and hailed the "incredible contribution" the Spaniard has made to the Olympic Movement since she became an IOC member in 2010.

The vote came after a tense and bitter campaign, which included a complaint being filed against Casado, secretary general Antonio Arimany and Bernard St-Jean, the head of the Legal and Constitution Committee.

The complaint, which called on Casado and the other two senior officials to resign, was rejected by the IOC Executive Board following a recommendation from the Ethics Commission after it found "no evidence of any personal unethical behaviour".

The Tribunal had claimed she had committed "gross and multiple violations of the values, principles and regulations" of the organisation and the Olympic Movement.

The legal document filed by the Tribunal centred on a dispute over an event in Cuba in February and what the panel claimed was a deliberate attempt by Casado and the two other senior officials to remove them from their positions on the body.

It said Casado, Arimany and St-Jean "should no longer have any role to play in the functions they occupy" as a result of the alleged ethical violations, which the Tribunal described as "extremely serious".

Freund had also faced criticism in the build-up to the vote, with former Triathlon Denmark Board member Thomas Schwartz claiming he "is not fit" to be President of the worldwide governing body.

Schwartz told insidethegames Freund had demonstrated "bad governance, a lack of ethics and morals" during his tenure at the helm of the National Federation.

Japan's Shin Otsuka and Antonio Alvarez of Mexico were re-elected as vice-presidents, while Britain's Ian Howard and Debbie Alexander of South Africa were also elected.

Otsuka polled the most votes with 98, with Alexander receiving 92, Howard 72 and Alvarez 73.

Sweden's Ria Damgren Nilsson failed with her bid for re-election as she earned 43 votes, ahead of Majid Amahroq of Morocco on 26 and behind Jamaica's Alan Beckford on 49.

St-Jean, Gabriella Gallegos of the United States, Miles Stewart of Australia and Leslie Buchanan of Canada were elected onto the Executive Board.