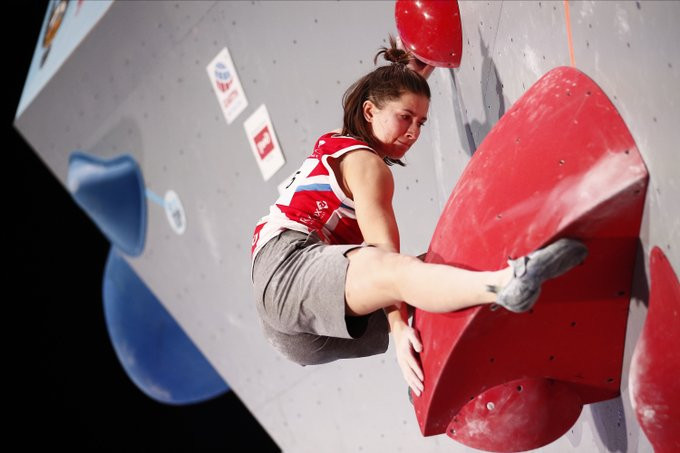 Russian climbers Viktoriia Meshkova and Aleksei Rubtsov have qualified for next year's Olympic Games in Tokyo from the International Federation of Sport Climbing (IFSC) European Championships after winning the combined events on the final day of competition in Moscow.

The Russian pair were crowned women's and men's combined champions at the Irina Viner-Usmanova Gymnastics Palace to seal the final two spots at the Tokyo 2020 Olympics.

Meshkova, 20, had already earned titles in the lead and boulder events at the Championships and was hoping for a good result in the three stage combined format.

The first stage of the day was the speed discipline with Meshkova placing second in this stage, behind Poland's Patrycja Chudziak who climbed the wall in 8.12secs.

Stage two of the day was the bouldering discipline won by Stasa Gejo of Serbia with a score of two tops and three zones.

The final stage of the combined event was the lead discipline with Meshkova ending with a score of 12 to seal the remaining women's berth at Tokyo 2020, where sport climbing is set to make its debut.

In the men's combined it was a similar scenario with only the winner securing Olympic qualification.

The first stage of the day was the speed discipline won by Marcin Dzienski of Poland in a time of 5.85secs.

Stage two was the bouldering event where Rubtsov, 32, made his move, as he finished top in the discipline with three tops and three zones.

The final stage of the day was the lead discipline with Rubtsov finishing fourth in that event giving him an overall score of 20, enough to seal his place at Tokyo 2020.

In the final overall standings, Rubtsov finished top with a score of 20, with Lehmann second overall with 24 and Luzhetskii third with 30.

Sport climbing is set to make its Olympic debut at Tokyo 2020, which has been postponed until July 23 to August 8 2021 as a result of the COVID-19 pandemic.