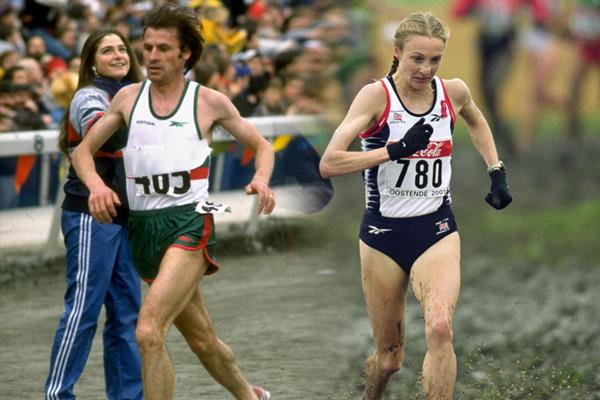 A pair of spikes worn by Britain's Paula Radcliffe when she won the World Cross Country Championships title in 2001 and the vest Portugal's Carlos Lopes was wearing when he claimed the Olympic silver medal in the 10,000 metres at Montreal 1976 have been donated to World Athletics Heritage.

Radcliffe's victory at the World Cross Country Championships in Ostend 19 years ago was her first gold medal at senior level.

It sparked the best period of her career which included retaining the World Cross Country Championships title in Dublin the following year, winning three World Half Marathon Championship gold medals and setting a world record for the marathon that stood for 16 years.

"I was delighted in 2019 to loan my spikes to the Heritage Cross Country Running Display in Aarhus which celebrated the 200th anniversary of the birth of cross country running," said Radcliffe, who is now 46.

"I am now very happy to donate those spikes to help permanently promote and support the magic and the importance of cross country running.

"It is the most elemental and natural of all the athletics events and provides an excellent foundation for success across all running disciplines."

Lopes led the 10,000m final for most of the race in the Canadian city but was passed in the closing stages by Finland's Lasse Viren, who claimed his third gold medal on his way to completing the 5,000m-10,000m double for the second consecutive Olympic Games.

But, eight years later in Los Angeles, Lopes did win an Olympic gold medal when he triumphed in the marathon.

During an outstanding career, Lopes also won the World Cross Country Championships title in 1976, 1984 and 1985.

"This year marks 35 years since my world marathon record and my third world cross victory," said the 73-year-old Lopes.

"It seemed the appropriate moment to contribute to World Athletics Heritage.

"Cross country running, as it was for them, was the foundation for my running career.

"I hope my donation will help inspire and excite fans around the world about long-distance running."