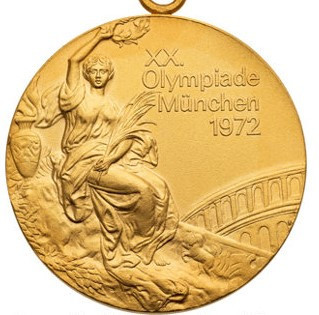 An Olympic gold medal won by Sergei Kovalenko when the Soviet Union beat the United States in the final of the basketball tournament at Munich 1972 in one of the most controversial moments in the history of the Games has been put up for sale on eBay.

The medals are being auctioned by a dealer in Germany, who claims to specialise in “antique and vintage things of the USSR”.

It is not explained how the medals won by Kovalenko, who died in 2004, came into their possession.

The US squad had won all 62 matches they had played in the Olympics since basketball made its debut in the Games at Berlin 1936 and had won the gold medal in seven consecutive tournaments.

They were trailing going into the closing stages at Munich 1972 but appeared to have clinched victory when Doug Collins converted two free throws with three seconds remaining to put the US 50-49 ahead.

But while he was taking those shots, a time-out was called by the Soviets.

The game resumed with a second left, and when that went by, the US players started celebrating.

But then the head of the International Basketball Federation came on the court, and ruled the clock should be put back to three seconds because of a refereeing error.

That was done, and the Soviet Union’s Sasha Belov promptly scored the single basket his team needed to win.

An appeal was held, and refused by three votes to two, but the American team felt a sense of great injustice.

The players all decided to refuse their silver medals, none of which have ever been collected and are claimed to remain in a Swiss vault.

Kovalenko, who was born in Lüshunkou in China, which in 1947 was under Soviet administration, but was brought up in the Ukraine.

The 7ft 1in centre was an important part of the Soviet Union team that finished third in the 1968 Olympic Games and won the 1969 European Championship in Naples.

Kovalenko played for several leading clubs in the Soviet Union, including CSKA Moscow, before retiring to Kiev, where he died at the age of 57.

Last September, the gold medal was listed for auction by New Jersey-based Heritage Auctions but was not sold.

The medal was designed by Gerhard Marcks, a renowned German artist and sculptor, and was produced at the Bavarian Mint.

It measures 66 millimetres in diameter.

The obverse of the medal shows the form of Victory, seated and holding a laurel wreath and palm branch with the Colosseum in the background.

The reverse of the medal depicts Roman twins Castor and Pollux, twin half-brothers in Greek and Roman mythology.

They are known collectively as the Dioscuri, and their Latin translation is the Gemini.

Normally, the medal from this Olympics would have been engraved with the recipient’s name, but it was left blank, owing to the confusing ending of the basketball final.

When it was put up for sale by Heritage Auctions, it was accompanied by two sworn statements by Nikolay Kunitsyn, the former President of Orienteering of Moscow, vouching for its authenticity.

Kovalenko’s medals are just the latest pieces of unique Olympic memorabilia to be put for auction this year on eBay.

The 35-ton set of steel Olympic Rings that lit up the Sydney Harbour Bridge during the 2000 Games were put up for auction last October but so far failed to sell.

A bus used during the Closing Ceremony at London 2012 and the German flag carried at the Opening Ceremony of Rio 2016 have also gone up for auction on eBay this year.

To see the full listing on eBay click here.