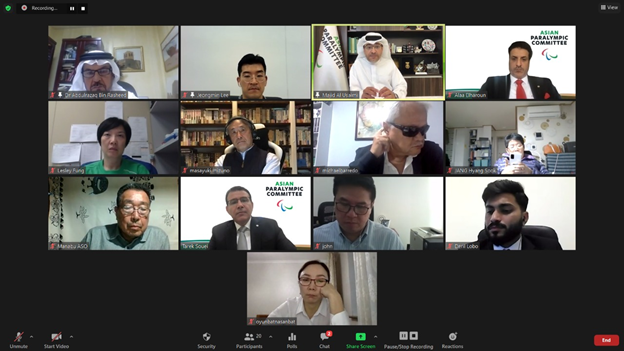 The Asian Paralympic Committee (APC) Executive Board met for its latest meeting via video conference and discussed its new strategic plan, as well as preparations for the upcoming 2022 Asian Para Games.

Held over two days, the 13 members of the Board received progress reports from future Games organisers including the Hangzhou 2022 Asian Para Games and the Bahrain 2021 Asian Youth Para Games.

With the Tokyo 2020 and Beijing 2022 Paralympics also set to take place in Asia, presentations for both Games were heard.

The APC's strategic plan was launched in January and is closely aligned with the International Paralympic Committee's own vision.

Five strategic priorities have been laid out, including enhancing the impact of the Paralympic Movement in Asia.

"Despite the pandemic, the APC haven't stopped and have continued with our efforts and hard work," said APC President Majid Rashed.

"We've held many virtual meetings with National Paralympic Committees and International Federations and will shortly hold our first Athletes' Forum.

"We have also developed good relations with organisations like Emirates Red Crescent and I am personally very happy with the outcome of the Memorandum of Understanding with them.

"In these hard times, we are trying to look at the positive side and learning from this experience in terms of overcoming the challenge together.

"I hope that this meeting will be the last virtual meeting and we hope to see you in person in the next Executive Board meeting."

Hangzhou 2022 organisers revealed that evaluations of independent venues had been completed and the initial competition schedule has been drafted.

The Bahrain 2021 Games updated the Board on a competition for the design of the mascot and emblem which has been launched, with the winners due to be announced on November 30.

Athlete classification and venue construction are expected to be completed over the next few months.

The Women and Sport Committee, headed by chairperson Nasanbat Oyunbat, informed the Board that it has been holding meetings about the development of female athletes in Para-sport in Asia, after a workshop on the topic was held in Tokyo last year.