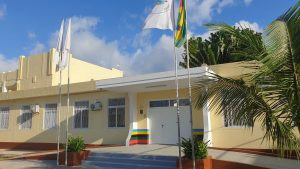 Dr. Jorge Bom Jesus, the Prime Minister of the African island nation, cut a ribbon at the new base in Quinta Santo António.

As well as the COSTP, the General Directorate of Sports and the Youth Institute will also be housed in the building, which is the former Palace of Pioneers.

Jesus was joined by São Tomé and Príncipe's Sports Minister, the Mayor of the Água Grande district and a representative from UNICEF at the opening.

Included at the headquarters is a computer room which National Federations can use if they do not have their own base.

Renovation work began in November of last year after a deal was struck which led to the COSTP and the Sports Ministry jointly financing the project.

São Tomé and Príncipe, a former Portuguese colony, made its Olympic debut at Atlanta 1996 and has competed at every Summer Games since.