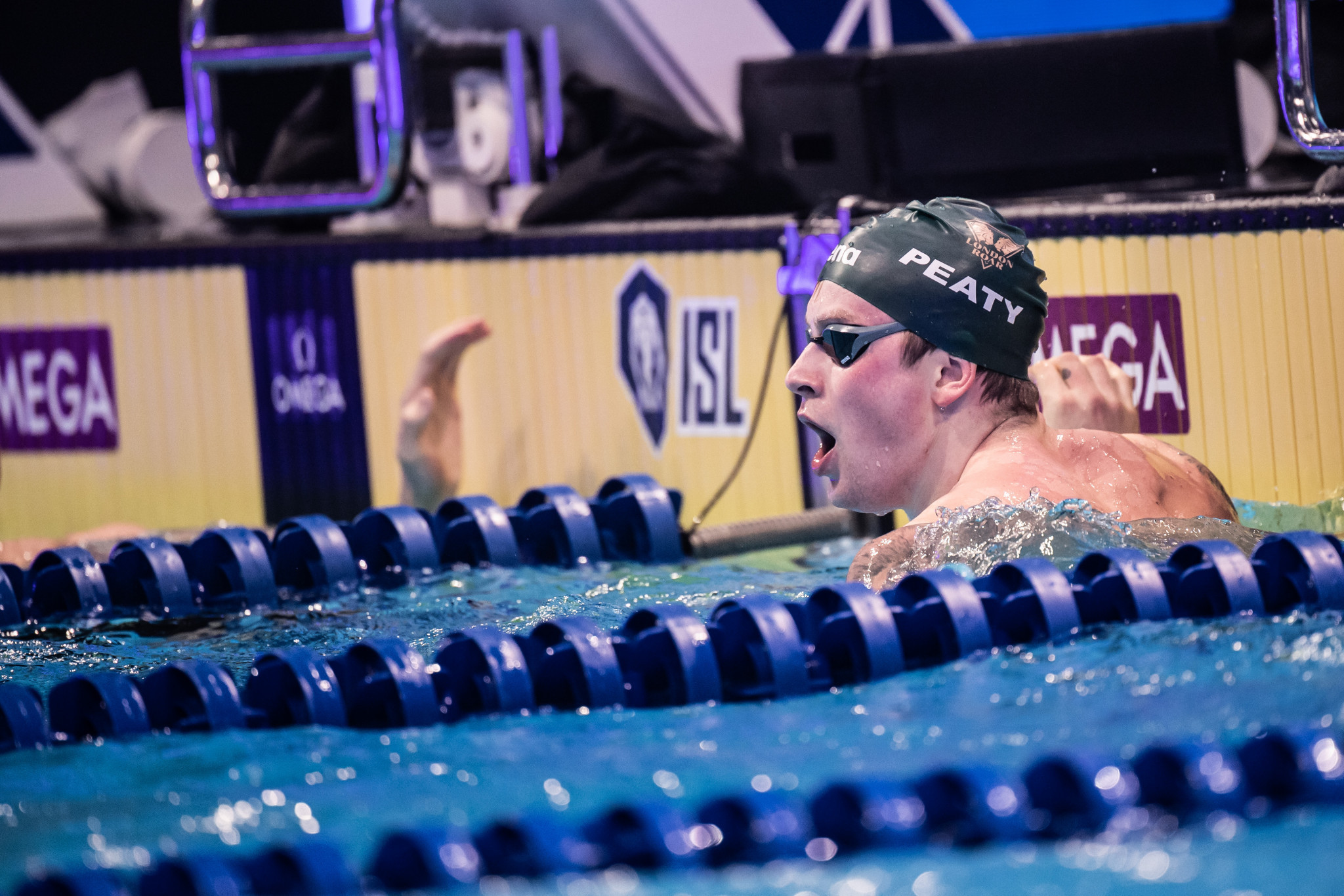 The Briton, racing for London, posted a time of 55.49sec to take 0.12 off the previous men's short-course world record.

Peaty - the Olympic champion over the distance - enjoyed an excellent second day of the match as he also won the 50m breaststroke skins competition, seeing off Ilya Shymanovich in the final.

The Belarusian, who swims for defending champions Energy Standard, had set a new European record over 100m earlier in the ISL season - something which sparked Peaty's Roar and Britain team mate James Guy to accuse Shymanovich of cheating by using outlawed dolphin kicks.

In the women's 100m breaststroke, Jamaican Alia Atkinson was just 0.31 away from breaking her own world record as the London franchise enjoyed another race win.

The day before, Dutch swimmer Kira Toussaint had become the first to set a world record at this year's ISL when she won the women's 50m backstroke - also for London Roar.

The team ended the first semi-final with 517.5 points, good enough for second place and a spot in the final.

Paris-aligned Energy Standard had 580 points, while third-placed Tokyo Frog Kings were way behind on 380.5 and New York Breakers only getting 239.

Peaty was second in ranking points accrued during the match, with last season's Most Valuable player - Swede Sarah Sjöström - top of the pile.

The 16 top-ranked swimmers in the semi-final were Energy Standard or London Roar athletes, underlining their dominance.

Siobhán Haughey of Hong Kong was another of the day's star performers, winning the women's 100m and 200m freestyle contests for Energy Standard.

The entire ISL season is taking place in Budapest because of the coronavirus pandemic, and the second semi-final also got underway at the Duna Arena later in the day between the Cali Condors, LA Current, Team Iron and Toronto Titans.

Cali Condors were unbeaten during the regular ISL campaign and were the favourites heading into the semi-final match.

After the first day of their match, they hold a 28 point advantage over the LA Current, their nearest rivals.

The first race won by the Condors was the men's 100m fly with American Caeleb Dressel triumphing in 48.92.

In the next race, the women's 200m backstroke, American Beata Nelson sprung a surprise as she was victorious in 2min 01.65sec.

Fellow American Lilly King, who has been one of the season's form swimmers took the women's 200m breaststroke for the Condors in 2:16.79.

The Condors also took the win in the women's 4x100m freestyle relay with their American quartet of Olivia Smoliga, Erika Brown, Alison Schmitt and Natalie Hinds victorious in 3:28.52.

Dressel was back in the pool for the men's 50m freestyle, winning in dominant style in a time that was just 0.04sec off his own world record - 20.28.

The Condors next success on the day came in the women's 50m breaststroke with American Molly Hannis springing a surprise as she defeated her compatriot and Condors teammate Lilly King to win in 29.24.

Smoliga, part of the successful relay quartet earlier in the session, secured individual success as the Condors won the women's 50m backstroke in 25.75.

Another American, Hali Flickinger, notched up another race win for the Condors when she took the women's 400m freestyle in 4:00.79.

Townley Haas then won the next race, the men's 400m freestyle, for the Condors taking victory in 3:41.35.

The final win of the day for the Condors came in the penultimate race - the women's 4x100m medley relay with their all-American quartet of Smoliga, King, Brown and Kelsi Dahlia taking victory in 3:48.09.

The Condors ended the day on 282 points, with the LA Current staying on their heels with 255.

The other two teams are significantly in arrears with Team Iron on 173 points in third and the Toronto Titans fourth on 171.