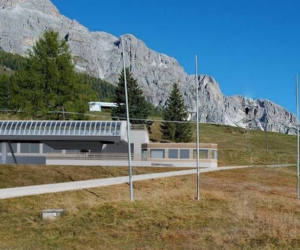 Long-awaited work is due to begin on a key element of the Milan Cortina 2026 Winter Olympic and Paralympic Games - a new cableway between the ski areas of Son dei Prade and Cianzopé-Bai de Dones.

The handover of the construction site in Cortina d’Ampezzo has taken place.

The new route will offer 70 eight-seater cabins for an hourly capacity of 1,100 people per hour and will be constructed on a route of almost five kilometres (4,600 metres) that will be divided into two sections with an intermediate station.

The work has been planned for a decade.

"An intervention that is finally a reality thanks to the work of the current municipal administration of Cortina d'Ampezzo in collaboration with Commissioner Valerio Toniolo."

The new cable car link will be important for skiers and will also be strategic during the summer for hikers and mountain bikers.

It will also help to reduce C02 emissions from motorised vehicles, it is claimed.

But, as Italy's national press agency ANSA reported, attention will also be focused on protecting the environment.

Valerio Toniolo, Commissioner of the region’s hosting of the 2021 International Ski Federation Alpine World Ski Championships, has started a dialogue with the Regole d'Ampezzo - the historic local institution, which manages the approximately 16,000 hectares of forest.

This, it is hoped, will lead to the signing of an agreement for the environmental compensation works.

"For more than 10 years we have been waiting for the start of this work, which will mark an improvement in traffic conditions, reducing traffic," Toniolo said.

"And it will allow skiers and tourists more travel possibilities.

"All with the utmost attention to the environment and the biodiversity of the territory."