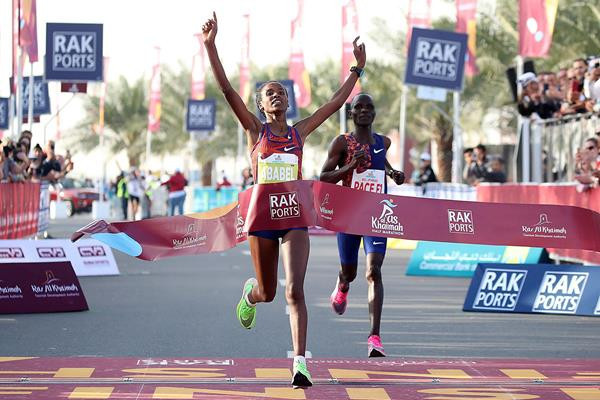 The Female World Athlete of the Year 2020 shortlist has been revealed for the World Athletics Awards, with five new world record holders from this season among those vying for the accolade.

Among them are two Ethiopians – with Letesenbet Gidey emerging as one of the favourites having set a world record of 14min 06.62sec in the women's 5,000 metres at the Valencia World Record Day event in Spain last month.

Her compatriot Ababel Yeshaneh will also be among the favourites after she broke the women's half marathon world record in February with a new best of 1 hour 4min 31sec.

She later finished fifth at the World Athletics Half Marathon Championships in Poland.

At that event in Gdynia, she was defeated by Peres Jepchirchir of Kenya – who claimed the title and bettered her own world record for a women-only race.

After breaking that record earlier in the season as well, she won the World Half Marathon title in a new best of 1:05:16 and is shortlisted for the award as well.

"My goal was to win this race. I did not expect that I would beat the world record, but I realised that it could happen when we passed 20km." – Peres Jepchirchir

Here's how the #WorldHalfMarathon champion paced her record-breaking race 👑 pic.twitter.com/MI9iwsDNzN

Two other Kenyans have also made the list with the familiar faces of Faith Kipyegon and Hellen Obiri recognised for their world leads this year.

Obiri was undefeated in three races over 3,000m and 5,000m and set the world leading time for the shorter distance in Doha after running 8:22.54.

The Netherlands' Sifan Hassan has once again had a strong season after setting a world record in the one hour run, covering a distance of 18,930m.

The final new world record holder in the field is Venezuela's Yulimar Rojas after she set an indoor triple jump mark of 15.43 metres.

Rojas, who was named as the Rising Star award winner in 2017, is also undefeated in four triple jump competitions both indoors and outdoors.

Elsewhere, a second Dutch athlete, Femke Bol, has made the shortlist after remaining undefeated in six 400m hurdles races this season.

Britain's Laura Muir has been nominated after remaining undefeated in three 1500m races, including a world lead of 3:57.40.

Double Olympic sprint champion Elaine Thompson-Herah of Jamaica completes the list after setting a world lead of 10.85 in the women's 100m and finishing first in all seven of her races over the distance.

With the exception of Rojas' Rising Star win in 2017, none of the athletes shortlisted have won the Female Athlete of the Year accolade.

It means a new winner will be crowned once again, continuing a streak that has existed since 2010.

The voting will close at midnight on November 15, which will lead to a final five finalists being announced by World Athletics.

The awards ceremony will be held live on December 5 in a virtual capacity for the first time, due to COVID-19.