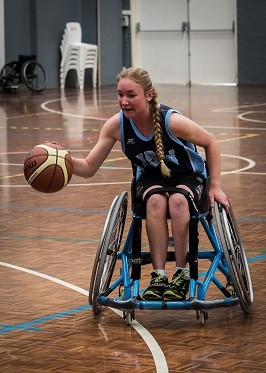 Australian wheelchair basketball star Jessica Cronje says she is both "nervous" and "excited" at the prospect of competing in the rearranged Tokyo 2020 Paralympic Games.

The 22-year-old from Menangle has represented Australia several times at national level but is looking forward to hopefully competing for a country at the Paralympics for the first time, if the rearranged Games take place in July and August 2021.

"It's a bit surreal because playing basketball at the Paralympics means I will be playing with and against the best of the best from Australia and across the world," she said, as reported by the Wollondilly Advertiser.

"I represented Australia in some junior competitions and that was amazing in itself but just picturing what it will be like at the Paralympic village, among the top athletes in their sports, is going to be incredible."

Cronje, who has cerebral palsy, has been a member of the Australian national wheelchair basketball team, nicknamed the Gliders, since 2015.

"I got my first sporting wheelchair when I was 15 after I made the New South Wales team," Cronje said.

"It's the first custom chair I had ever owned and that chair was with me when I made the Australian team and travelling all over the world but its had a few issues and had to be repaired a few times.

"So this new chair means a lot to me.

"It fits better because it's custom made for me, it's easier to manoeuvre, it's faster, higher and tighter - it's really good."

Sporting pedigree runs in Cronje's family with her father a national showjumper.

"I would compete in horse events from when I was three and then as I got older I wanted to try other sports so I moved onto athletics," said Cronje.

"I wanted to be an all-rounder so I would run, and jump and do throws but I ended up focusing on shotput and discus because with my disability I would fatigue easily."

Cronje said she met a wheelchair basketball player at an athletics competition, and from then on she was hooked on the sport.

"He convinced me to go to a come and try day and it was love at first try," she said.

"I struggled at first because I had to push the chair and dribble the ball at the same time, and then I had to learn how to turn as well.

"But I had better endurance - I could whizz up and down the court in that chair, it was perfect for me."

Australia's women's wheelchair basketball team did not qualify for Rio 2016, but medalled in the previous four Games, with silvers on home soil at Sydney 2000 and then at Athens 2004 and London 2012.

They also won a bronze medal at Beijing 2008.