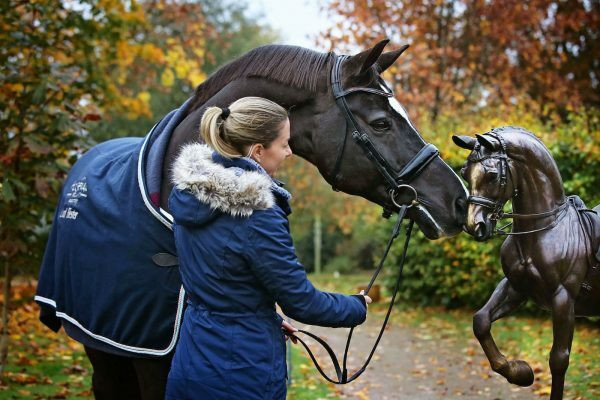 A bronze statue of triple Olympic gold medal-winning horse Valegro has been unveiled in Newent, the small market town in Gloucestershire in England where the gelding is based with his rider Charlotte Dujardin.

Permission for the statue was only given officially earlier this month and it has now been erected at the International Centre for Birds of Prey, where it was unveiled by Dujardin and co-owner Carl Hester.

It is planned to move the half-size statue of the horse in the Market Square in the town.

The bronze horse measures just over a metre in height, stand on a 72 centimetres high plinth and is just under 1.5m in length.

The statue, designed by Georgie Welch, depicts Valegro in action, with a Union Jack on the side of the horse’s saddle.

The Newent Initiative Trust said it is hoped the statute will attract visitors to the town.

"Originally it had been planned to be a full-sized statue but it was decided by the committee and Carl that a half-life, similar to those at Cheltenham racecourse, would be a better fit and not be as costly," a spokesman told Horse & Hound.

"Georgie won the chance to make the statue in 2018 and has been working with Carl, [groom] Alan [Davies] and Valegro - (with, I am told, a lot of packets of Polos - to produce this wonderful statue, which will be going up by Market House in Newent soon after this unveiling."

A gold-painted post box was erected in Newent after London 2012 to mark the success of Dujardin, who riding Valegro won Olympic titles in the team and individual dressage at those Games.

The horse also has a road in its honour in Newent, with Valegro Avenue named after the steed.

Hester also won a gold medal on Uthopia alongside Dujardin in the dressage team at London 2012.

It was amazing to see Valegro back in the limelight today when he thoroughly enjoyed a trip out to meet...himself! The volunteer Newent Initiative Trust unveiled a half life sized statue to watch over Newent town by local sculptor Georgie Welch. Read more: https://t.co/QnKqgF7GMP pic.twitter.com/QeD58MBQkQ

Dujardin and Valegro went on to win a third Olympic gold medal at Rio 2016 in the individual dressage, cementing the combination's position as the most dominant pair in dressage history.

They also won a silver medal in the team dressage, again with Hester, who this time was riding Nip Tuck.

Valegro, a Dutch Warmblood gelding, is co-owned by Hester, together with Roly Luard and Anne Barrott, and Dujardin had started riding him after originally joining his stable as a groom.

The original plan was for Hester to ride Valegro but Dujardin developed such a bond with the horse their partnership lasted all his career.

Valegro is also a double world champion, having won the grand prix special and grand prix freestyle at the World Equestrian Games in 2014 in Normandy in France.

Valegro and Dujardin marked his retirement from competition in December 2016 with a special performance at the London International Horse Show that was televised live on BBC.

"Under his rug is a big tummy; anyone that knows horses will know that the most important thing is not gold medals, it’s eating food and he does that very well!

"He may have retired from competitions, but we still have a lot of people who come to the yard to see him, so he is a celebrity in his own right.