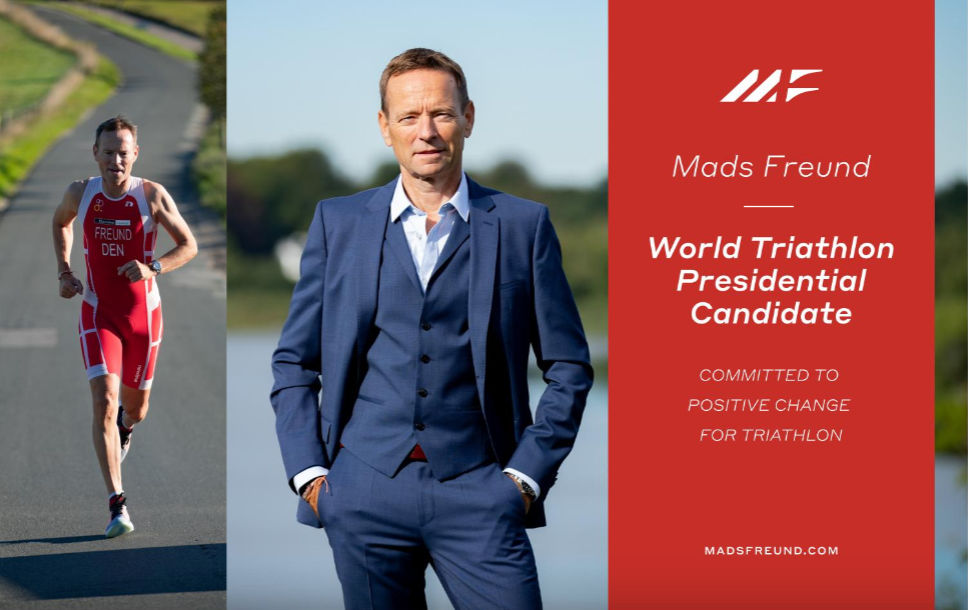 Mads Freund has pledged to give more power to continental federations and strengthen election practices should he be elected World Triathlon President.

The Triathlon Denmark head was confirmed as the sole challenger to incumbent World Triathlon President Marisol Casado earlier this month after insidethegames exclusively revealed he would stand.

Both officials lodged their candidacies prior to the deadline on October 15.

The election is due to take place virtually on November 29 after World Triathlon abandoned plans to stage its Congress in a hybrid format.

Freund has vowed to re-establish World Triathlon as the undisputed leader of triathlon in his manifesto, suggesting the governing body has been "lagging behind other brands and associations" with alternative competitions becoming established.

He said World Triathlon needs to raise the profile of its World Championships and ensure all countries and athletes are involved in the decision-making process in the sport.

Freund claims he will develop a strategic plan for the sport which will give more power back to the continental bodies, along with suggesting a financial programme tailored to the needs of each national federation.

"Among my first actions as World Triathlon President, I want to develop a long-term strategic plan, that prioritises inclusive management practices and clearly focuses on driving a positive impact for the whole triathlon family," Freund wrote.

"Because now is the time to strengthen and rebuild the trust with our members and our organisation.

"For this to happen, we need to create a culture that fosters innovative and creative thinking, ensures clear and transparent communication, and gives high flexibility to our regions to operate according to their unique needs.

"We are entering a new era; now is the time be open and proactive, to ensure that our sport remains strong, healthy and agile.

Freund added Triathlon Denmark, the organisation he leads as President, has submitted a resolution aimed at ensuring "fair and transparent election practices".

He has claimed the current election system "technically allows for incumbents to use our resources for their personal campaign".

The resolution calls for World Triathlon to adopt "equal conditions and possibilities" for candidates running to become President, vice-president, an Executive Board member or stand on a committee.

The motion also suggests equal funding for candidates seeking the World Triathlon Presidency, with the Executive Board determining the upper limit.

World Triathlon resources and staff would not be allowed to be used for campaigning under the proposal, while candidates would have equal possibilities to campaign at events run by the governing body.

Triathlon Denmark say the motion supports "fair play and equality", while it is claimed that last year’s Congress in Gold Coast "behaviour that appeared to compromise the principles of good governance was observed".

Freund’s manifesto suggests the current leadership has "run out of energy" and risks putting the sport’s governance into question.

"We have reached a point in our organisation where we need new ideas and a new leader to take World Triathlon to the next level," Freund writes.

"Furthermore, having reached the 12-year cap in our constitution, our current leadership is putting out governance into question by running for another term.

"This imposes the risk of damaging our reputation, both internally and externally.

"Good governance should not be compromised."

Freund is seeking to unseat Casado, the only female head of a Summer Olympic International Federation who was elected World Triathlon President in 2008.

The 64-year-old, who became a member of the International Olympic Committee in 2010, will serve as President until after the Paris 2024 Olympic Games if she is re-elected.

She is eligible to serve another two terms as President after a 12-year maximum tenure was introduced in 2016.

Casado will lose her IOC membership if she is defeated in the election.