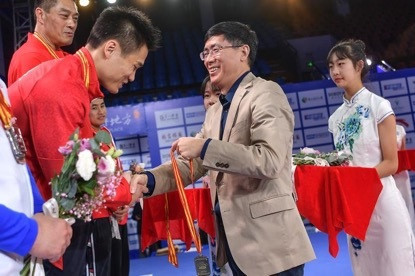 Two of China’s top gold medal hopes for Tokyo 2020 were in world-record form at the Men’s National Championships in Kaihua, where a teenager made his mark in sensational style.

It was a mirror of the Women’s National Championships last week where three lifts were above world-record level and an "unknown" teenager excelled.

Shi Zhiyong stands way ahead of his Olympic qualifying rivals in the 73kg category and despite recent injury problems he showed why he is such a strong favourite in making a total of 363kg.

That was equal to his world record and it featured a clean and jerk of 199kg, which is 1kg better than his world best.

Because this was not an international competition, however, no lifts can be counted as world records.

Shi had been struggling with injuries and was not in the best condition for the championships, he said, but he was inspired by his surroundings.

"When I came to Kaihua City, the hometown of Zhan Xugang, my very first coach, I was very excited and encouraged," he told local media.

"I was very determined to try my utmost to lift and have exhausted all my strength in today’s competition.

"This is my character - as long as I get on the weightlifting platform, I will do my best.

"No matter how difficult the competition is, I will knock out all my fellow lifters as long as I am there on the platform."

Zhan Xugang was a double Olympic champion for China at Atlanta 1996 and Sydney 2000.

The other Tokyo favourite to exceed his own world record mark was Li Fabin, who made a clean and jerk of 175kg in the 61kg category.

Li was beaten in the snatch by 18-year-old He Yueji, whose effort was 1kg higher than Li’s world best and 10kg better than the current junior world record.

He has never yet made the national team.

Chen Lijun, who leads the 67kg Olympic standings, had an injury problem and was beaten by Huang Minhao for the first time.

Huang, who holds the snatch world record in this category, was hoping to exceed that mark of 155kg but he missed his second attempt and came up just short.

In the clean and jerk Huang changed his technique, opting for the squat jerk rather than the split style he has favoured before – and it worked as he made 176kg for a total of 330kg.

At 81kg Lu Xiaojun missed his final attempts in both snatch and clean and jerk but still made 371kg, only 7kg short of his best effort in Olympic qualifying.

Lu’s main rival Li Dayin was absent with an injury.

Tian Tao, another strong favourite for Tokyo, was also missing after minor elbow surgery and in his absence the 96kg was won by Tian Ye with a comparatively modest 375kg.

There was a total entry of 275 athletes, and national records were broken 19 times.