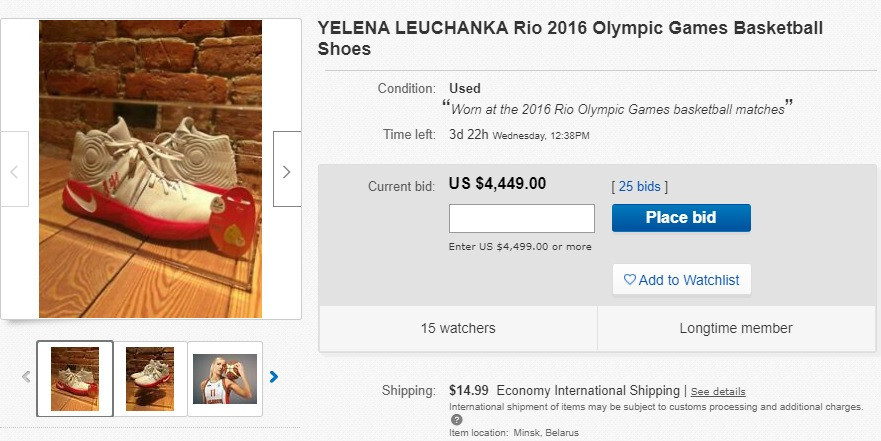 Leuchanka had been sentenced to 15 days in prison by Belarus courts after criticising the conduct of the presidential election which returned Alexander Lukashenko to power in August.

In a note on the auction site, Leuchanka wrote: "I decided to auction off my basketball shoes, worn at the Rio 2016 Olympic Games.

"That was my second Olympics.

"They are very special for me.

"But shall become even more special, if these shoes can provide use and support to people who need it and decorate someone's home at the same time.

"Let’s support each other!

"That is the only way to learn our real strength!"

The shoes are described as in used condition.

The website also carried the message that all funds will be transferred to the BBSF, which it said "provides financial, legal and psychological support to athletes and representatives of Belarusian sport community who suffered from violation, repression, asserting their civil rights and to those ready to speak out on what is happening in Belarus these days".

At least 10 other prominent Belarus sports stars have also been imprisoned and a dossier produced by protest groups detailed that over 40 sports personalities have been subjected to Government pressure and discrimination for speaking out or demonstrating against President Alexander Lukashenko.

A group including the BSSF delivered a letter to the IOC yesterday calling for a suspension of the NOCRB.

The auction also includes a Fed Cup runners up trophy awarded to Natasha Zvereva in 1990.

Zvereva was considered one of the top doubles players of her generation, winning all four Grand Slams and a bronze medal with Leila Meskhi at the 1992 Barcelona Olympics representing the Unified team.