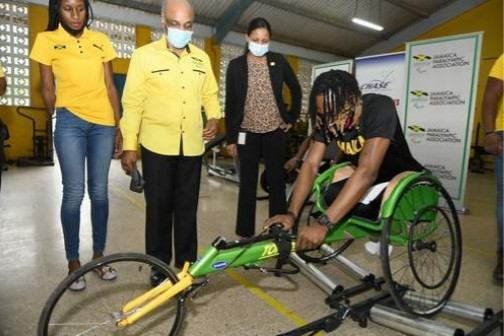 It is hoped the donation will boost Jamaica's Paralympic training programme.

The handover was made yesterday at the Sir John Golding Rehabilitation Centre in Kingston, with the equipment including a bench press set and a racing wheelchair roller, which has the ability to record speed and distance as well as store data.

"Our involvement ranges from institutional support to research and the assistance cuts across all the areas for which we have a mandate - health, early childhood education and arts and culture," said Chase project manager Latoya Aquart-Foster, as reported by Jamaica Observer.

"We want to help empower and encourage these Para-athletes who have made us proud at international competitions, garnering medals and establishing world and regional records."

Jamaica made its Paralympic debut at Tel Aviv 1968.

The country has claimed 54 Paralympic medals since then, including 20 gold.

It did not earn a single medal at the Rio 2016 Paralympic Games, however.