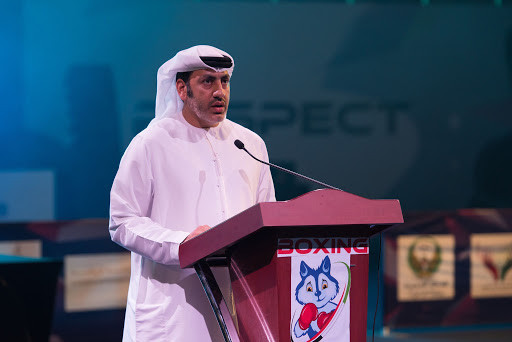 Al Otaiba, an AIBA vice-president and a member of the body's Executive Committee, is the third official to publicly declare their intention to stand for the top job at the embattled organisation.

Azerbaijan's Suleyman Mikayilov and Dominican Republic's Domingo Solano have also said they will run for President, while it is widely expected Russian Umar Kremlev will enter the race before the November 2 deadline.

The Presidential election is scheduled to be held virtually during the AIBA Extraordinary Congress on December 12 and 13.

Al Otaiba revealed his bid to become AIBA President in a statement released by the United Arab Emirates Boxing Federation (UAEBF), which he has led since 2017.

The 44-year-old said AIBA had reached a "tipping point" after it was suspended as the Olympic governing body for the sport because of issues with its governance, finances and refereeing and judging.

"We need to work harder, smarter and with agility by seizing the last opportunity of AIBA's rebirth provided by the International Olympic Committee (IOC)," Al Otaiba said.

"In view of that, I have decided to run for the AIBA Presidency after vigorous consultations with a lot of national federations from all over the world.

"We want to preserve the long heritage of AIBA as the representative of one of the first Olympic sports ever."

Al Otaiba – a former member of the Tawazun Economic Council, which is responsible for the creation and development of a sustainable defence and security industry in the UAE – is the most senior AIBA official to enter the Presidential race so far.

He succeeded Serik Konakbayev as ASBC President during the 2018 Congress where the Kazakhstan official lost the AIBA Presidential election to Uzbekistan's Gafur Rakhimov.

The UAEBF President had been considered a close ally of Rakhimov, who stood down in March 2019 following allegations that he was involved in heroin trafficking.

The accusations against Rakhimov and his subsequent election sparked the IOC into action and contributed to the decision to suspend AIBA in June 2019.

Al Otaiba automatically became a vice-president of AIBA by virtue of taking up the position with the Asian organisation and has since served on the ruling Executive Committee.

This year's election is considered vital to AIBA's chances of being reinstated by the IOC before Paris 2024.

AIBA has been without a permanent President for 18 months after Rakhimov stood down in March 2019.

The troubled federation has since been led on an interim basis by Morocco's Mohamed Moustahsane.

A series of statute changes are also set to be approved at the Extraordinary Congress in December.

The IOC said last week it was "very worried" with the progress made by AIBA with its governance reforms, which it has promised since it was stripped of any involvement in the boxing tournament at the postponed Tokyo 2020 Olympic Games.