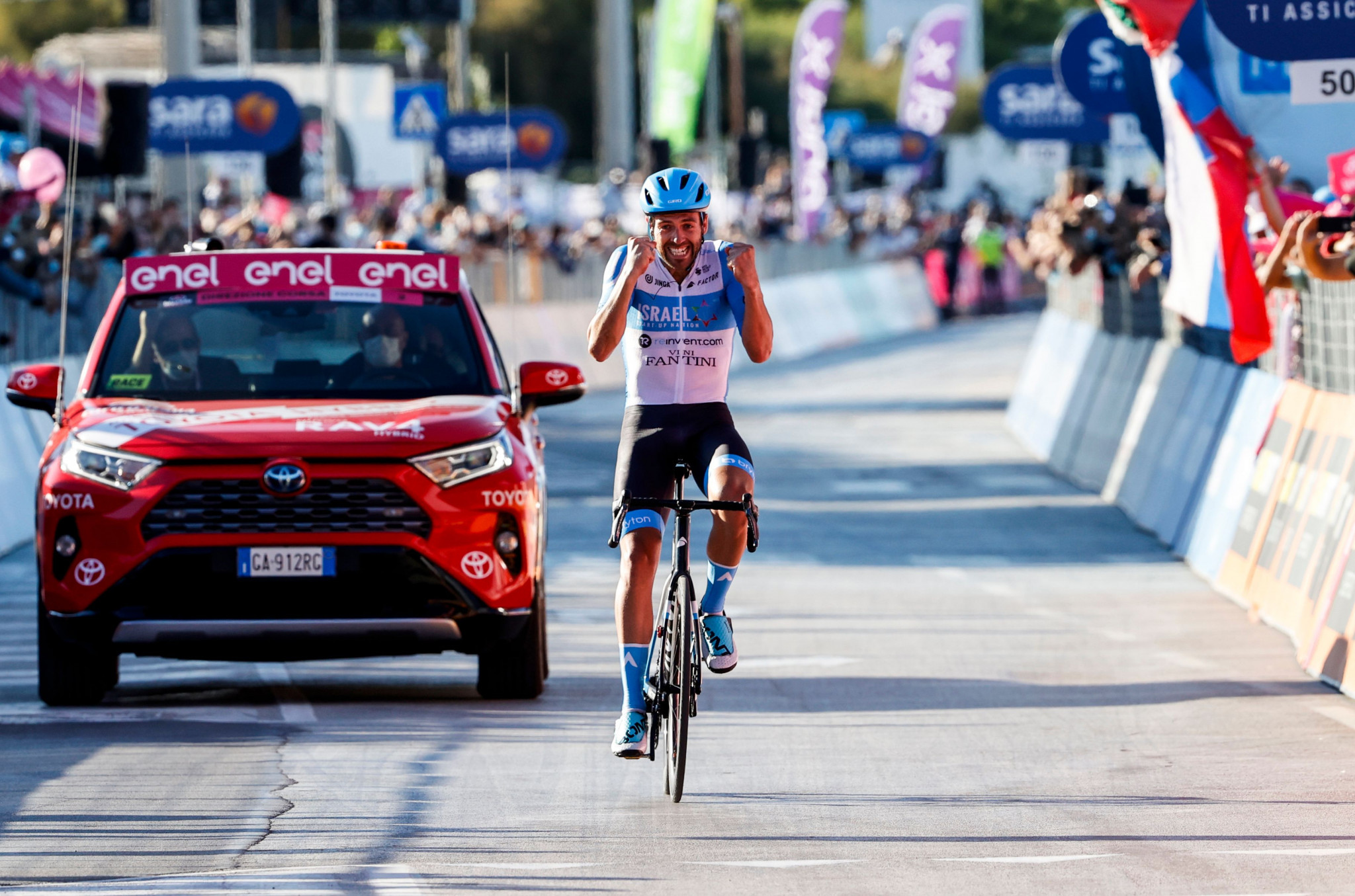 Britain’s Alex Dowsett claimed a solo victory on stage eight of the Giro d’Italia following an attack from the breakaway, as Simon Yates was withdrawn from the race after a positive test for coronavirus.

The day began with news of Yates’ withdrawal, with Mitchelton-Scott saying he had developed very mild symptoms after yesterday’s stage.

"Simon displayed a very mild temperature on Friday evening during our routine temperature checks, which have been completed three times per day during the course of the Giro d’Italia," said Matteo Beltemacchi, Mitchelton-Scott team doctor.

"Following the team’s RACESAFE COVID-19 policy, he was isolated in his room and we immediately requested a rapid test using the services offering by the [race organiser] RCS, which has returned positive.

"Simon’s health remains our main concern and, thankfully, his symptoms remain very mild and he is otherwise in good health.

"We want to thank the RCS for their support in arranging the quick testing and his transport.

"All other riders and staff have returned negative results and have been cleared to continue the race, but as a precautionary measure we will monitor the situation closely and undergo further testing in the coming days."

The group established a lead of more than 10 minutes to the peloton, with the stage victory set to be decided between the six riders.

The Israel Start-Up Nation colleagues worked together to prevent their rivals from breaking clear, before Brändle launched his own attack with less than 20km to go.

Brändle’s move proved unsuccessful, but his effort allowed Dowsett to counter-attack and launch a solo bid for victory.

Dowsett was able to celebrate the second Giro d’Italia stage victory of his career, following a time trial success back in 2013.

He finished in a winning time of 4 hours 50min 9sec, giving Israel Start-Up Nation their maiden triumph at WorldTour level.

"Since Israel Start-Up Nation stepped up to the WorldTour, we’ve been fighting for this victory," Dowsett said.

"Today we had a plan to break away, either Matthias Brändle or myself could have been the winner.

"It’s an incredible thing to have experienced, and a massive relief.

"Uncertainty is the nature of 2020 and I have no contract for next year, I still want to be a bike racer.

"I have my first baby on the way, it makes me worried but I’m looking forward to being a dad.

"It must be as emotional as winning today’s stage."

Puccio, Holmes and Rosskopf finished 1:15 behind the stage winner.

The peloton crossed the line 13:56 after Dowsett, with the general classification contenders ending safely in the group.

The Deceuninck-Quickstep rider is currently 43 seconds ahead of Spain’s Pello Bilbao, with The Netherlands’ Wilco Kelderman a further five seconds down in third.

Tomorrow will see the riders complete a 207km mountain stage from San Salvo to Roccaraso, prior to the first rest day of the race.