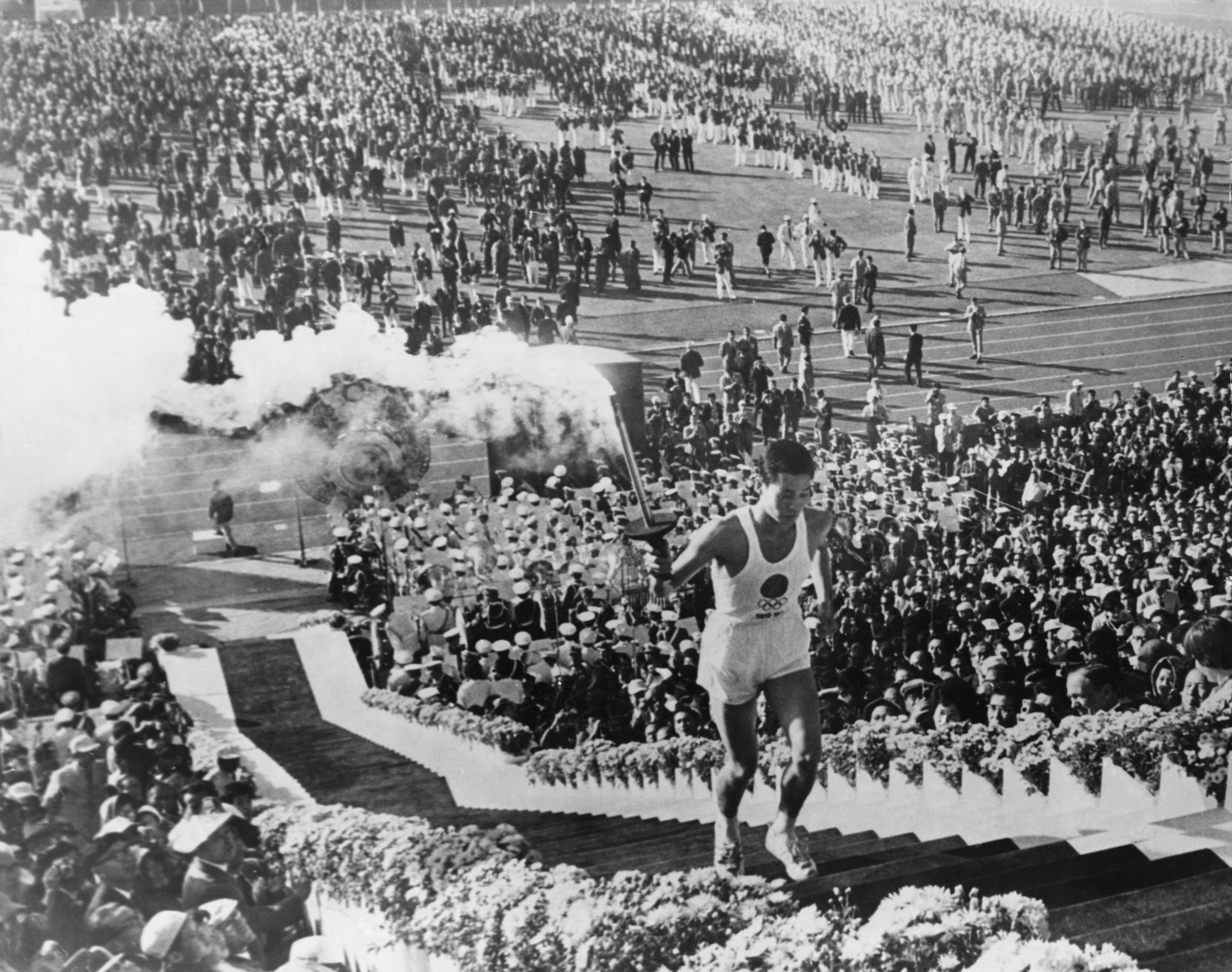 He had not been chosen by chance, Sakai, a student at the Waseda University, had been born on the very day the atomic bomb was dropped on Hiroshima.

"Happily, I know nothing of war. I have grown up free from care in the atmosphere of freedom in a peace-loving Japan," he said.

Tokyo’s 1964 Games were seen as a symbol of hope and rejuvenation of Japan after the Second World War. This week, International Olympic Committee officials have been quick to draw parallels with 2020.

"As Tokyo prepares to host an Olympic Games fit for a post-corona world, the themes of rebirth and resilience are once again on the cards. This time, Tokyo symbolises the resilience of a world in the midst of a global pandemic."

Six of the venues used in 1964 will be reused in the 2020 Games although it should be said that the Olympic Stadium was raised to the ground and completely rebuilt which seemed to go against the grain of the IOC’s "new normal."

When the 2020 Flame was lit back in Ancient Olympia six months ago, IOC President Thomas Bach recalled that "back in 1964, the first Olympic Games in Asia marked a new beginning for a peaceful and dynamic Japan among the family of nations.

"The Olympic Games Tokyo 2020 will again be a symbol of hope and confidence for all Japanese people."

Those 1964 Games did have at least one political crisis. Some nations had taken part in the Games of New Emerging Forces (GANEFO) organised the previous year in Jakarta. These were not officially sanctioned because Israel or Taiwan (later known as Chinese Taipei) were not invited to take part.

When the athletes who had participated in Indonesia were threatened with an Olympic ban, both Indonesia and North Korea withdrew. This denied 800m world record holder Dan Sin-Kim the chance to compete and she never did grace an Olympics.

When Tokyo staged the Games in 1964, they were at the cutting edge of modernity.

The city itself had a new air of modernity. The now familiar "Bullet" train began operation nine days before the Games and a new monorail enhanced the image of a city of the future.

The decorations of the Olympic city were also seen in Cary Grant’s final film, an American comedy called "Walk Don’t Run" in which Grant’s character arrives during the Olympics.

In the official report, then IOC President Avery Brundage insisted: "In Tokyo everyone united to clean, brighten and improve the city and a vast programme of public works involving hundreds of millions of dollars was adopted."

It was easier than it might otherwise have been for a visitor to find ways around the city. A series of pictograms had been introduced for non Japanese visitors.

Markus Osterwalder, curator of an Olympic Museum exhibition on graphic design explained: "They reduced the shapes and sizes to the minimum needed to understand the message.

"The Japanese were faced with the problem of language. Nobody speaks Japanese outside Japan.

"So they really had to find something that would work for all the people from other countries. A non-verbal system."

The sport in 1964 proved memorable.

Volleyball was included for the first time, and to the delight of the hosts Japan’s women won gold. Most had expected them to do so, for they were reigning world champions.

A bronze medal for the men’s team, a first podium finish at this level, was also considered highly satisfactory.

After years of campaigning, the Japanese national sport of Judo was also included and Joao Havelange, later FIFA President praised the "perfect organisation of the judo competitions. Judo is a sport which has spread throughout the whole world thanks to the Japanese."

For the Japanese the judo competition did not quite finish perfectly. They won three gold medals but the most prestigious of all, the "open" category was won by giant Dutchman Anton Geesink.

In the main stadium, Al Oerter won his third consecutive discus gold and Mary Rand of Britain soared to a world record in the long jump.

Abebe Bikila of Ethiopia retained his marathon title but many will also remember the late surges which brought gold to native American Billy Mills in the men’s 10,000 metres and to Ann Packer of Britain in the women’s 800m.

The results were communicated as rapidly as possible.

"Upon the announcement of the results of a race by the final judges, a copy was sent by the vidicon camera, and the same image appeared on the receivers of the officials and the reporters.

"As transmission was done quicker than any other medium, this system was very popular with the reporters," said organisers.

The advent of intercontinental satellites revolutionised television coverage and the games were shown around the world for the first time.

Pictures were beamed from the Syncom Three satellite to Relay One and the United States and then transmitted across the Atlantic Ocean to the ground station at Pleumeur-Bodou in northern France.

"An unexpected stroke of luck has put the satellite in the right position at the right time," said a television spokesman.

The pictures were for the most part in black and white, although some selected events were televised in colour as they would be at all future Games.