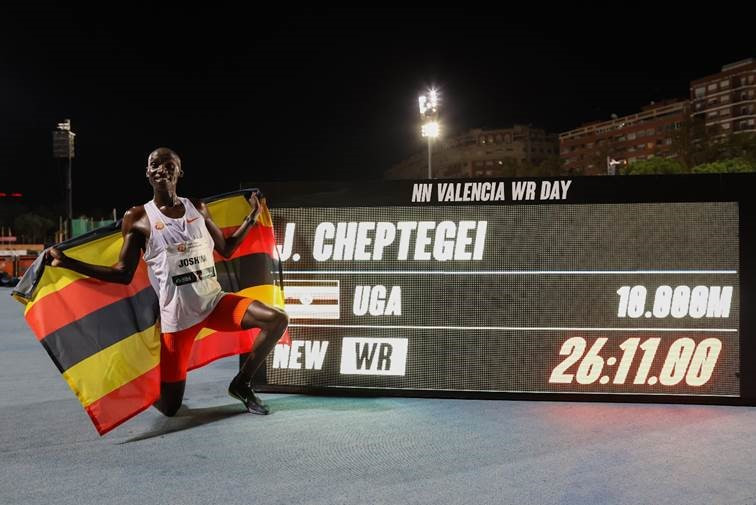 The NN Valencia World Record Day lived up to its billing tonight as Joshua Cheptegei of Uganda set a men's 10,000 metres world record of 26min 11.00sec shortly after Ethiopia’s Letesenbet Gidey had broken the women’s world 5,000m record with a time of 14:06.62.

Both runners took advantage of ideal, windless conditions in the small-scale Turia Stadium in Valencia in Spain, watched by a smattering of masked, but vocally enthusiastic, spectators.

For Cheptegei, 24, this was the third race of 2020 and the third world record, following his new mark in the five kilometres road race in Monaco in February and, also in the Principality, his world 5,000m record of 12:35.36, which dispossessed Bekele of the first of his big world records, the mark of 12.37.35 set in 2004.

Asked during last week’s London Marathon press conference if he had any advice for Cheptegei as he targeted the 10,000m record, Bekele appeared momentarily nonplussed, before responding: "If someone has already broken the 5,000 metres record, how can you give advice to them about a second record?

"I think he doesn’t need any advice from me.

"So no advice - just watching!"

The decision by Jos Hermens’ Global Sports Communication agency, which set up this race, not to charge for broadcast rights meant that many thousands of athletics fans around the globe were able to watch this feast of distance running on the World Athletics YouTube channel.

The optimism engendered was fully realised.

Cheptegei, winner of the World Cross Country title last year before earning the world 10,000m gold medal at the World Championships in Doha, had asked for even pacing throughout, at 63 seconds per lap.

That was duly provided for him, although the last remaining pacer, Kenya’s Nicholas Kipkorir Kimeli, who had hoped to be able to lead the Ugandan to around the 7,000m mark, had to drop back as they passed 5,000m in 13:07.73.

Cheptegei had half a race of lonely effort ahead of him, but although he had the grace to look a little fatigued on the final lap he remained comfortably alongside the blue indicators provided on the inner rim of the track by the Wavelight technology which is now able to assist runners in pacing.

Blue lights marked the ideal pace, while the green lights that snaked behind them indicated the current world-record pace.

Cheptegei knew he was in business if he could stay the course - and he could.

Next year’s Tokyo 2020 10,000m final, if it goes ahead, could be something special, with Britain’s Sir Mo Farah seeking to be there to defend his title.

"I wanted to live up to my expectation, and I have fulfilled my dream," said the admirably composed Cheptegei afterwards.

"We were trying to write history tonight - we want people to know that the track is exciting.

"This is the latest edition of what can happen and what I can achieve in the years to come."

"He really is a superstar," Gebrselassie said.

"He's a gifted athlete, and simply, he's the best.

"I worry that if he runs under 26 minutes it will be very difficult for others to break it."

Gidey had started the night by shattering Dibaba’s record with a faultless performance, following her race plan of escalating speed for the laps, starting with 69 seconds for the first three of the 12-and-a-half distance, then moving to three of 68, then moving on to 67.

Gidey - who was beaten to the world title last year by Sifan Hassan of The Netherlands - looked relaxed throughout, and overtook Chepkoech before the latter moved fully away from the race just before the athlete of the moment went through 3,000m in 8:31.85.

Facing the final five laps alone, Gidey’s progress was made clear as she ran alongside the blue pacing lights, occasionally looking down at them for reference.

The runner who came to notice winning the world junior cross country title in 2015 and 2017 barely gave signs of strain even on the final lap, although she certainly looked momentarily overcome as she realised what she had achieved.

This was the greatest performance so far in a running career that only properly started at school, when, as a 13-year-old, she was expelled for refusing to run in physical education classes.

"I brought my parents to school to talk to the headmaster with the hope of getting reinstated.

"He agreed to reinstate me only if I ran for the school.

"I reluctantly agreed, just for the chance to get back to school."