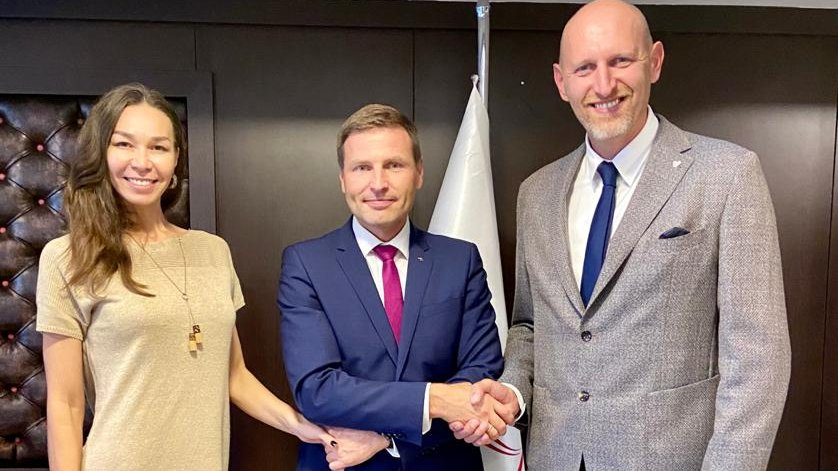 European Volleyball Confederation (CEV) Presidential candidate Hanno Pevkur has announced Turkey’s Bahar Mert and Czech Republic’s Marek Pakosta will serve as part of his leadership team should he be elected.

Mert would become the first woman to hold the position of CEV senior vice-president, while Pakosta would serve as vice-president and treasurer.

Turkish Volleyball Federation Board member Mert is a former national team player and was part of the team that won the silver medal at the 2000 European Indoor Championships,

She represented the Turkish national team on 312 occasions during her career and played professionally for clubs in various European leagues.

Pakosta serves as Czech Republic Volleyball Federation President having been elected into the post in 2018, following senior management roles in sport, telecommunications, and estate management.

He had represented the Czech Republic in both indoor and beach volleyball during his playing career.

Typically four vice-presidents are appointed by the CEV President, but Pevkur has said National Federations should be able to choose more candidates.

Pevkur made the announcement prior to an online townhall meeting for members of the CEV held today, where he outlined his plans should he be elected on October 16.

“Since I announced my candidature to become CEV President, I have been delighted with the reaction I’ve received from the many National Federations that I have spoken to," said Pevkur.

“Bahar and Marek share my vision for a more inclusive, modern and united CEV going forward, and I’m really excited by the approach they would bring to help serve all 56 of our National Federations.

“With Bahar and Marek we have a good geographical balance, as well as having small, medium size and big countries represented in the CEV top leadership.

“We will also – finally – have a woman as a top leader in CEV, something which I am sure will be appreciated by all female players and leaders of our National Federations.

“I’ve said from the beginning, that the choice between the candidates has to be made by Presidents of the National Federations.

“That is why my suggestion to the General Assembly is only to appoint senior vice-president and the treasurer.

“To compose the best team of vice presidents, my goal is that each Zonal Association is represented in CEV Executive Committee.”

Pevkur currently serves as CEV vice-president for development and is a member of the FIVB Board.

He has served as a Member of Parliament in Estonia since 2009, including a nine-year spell as Minister for Social Affairs, Minister of Justice and Minister of the Interior.

Pevkur told the townhall meeting that he wanted to drive innovation within the sport, which he said was falling behind other team sports such as basketball and handball in Europe.

He referenced his plans to introduce a solidarity mechanism for National Federations, if elected.

The mechanism would see at least 10 per cent of the CEV’s commercial revenue redistributed directly to the National Federations.

At least 20 per cent of the revenue would be ring-fenced for grassroots projects, Pevkur has claimed.

He vowed to work with the International Volleyball Federation to help support the development of smaller National Federations, which he believes will help European volleyball as a whole.

"We will work with the FIVB to support the smaller federations to bring them to a new level," Pevkur said.

"This is not only financial help, but also helping them in different ways.

"This is why I see tailor made support for everyone.

"We also think some of the larger federations can learn from the smaller ones, it is not one way traffic."

He also vowed to lower the financial burden for club teams and enhance the value of the Champions League to the next level, as well as establishing a Super Cup to serve as the season opener.

Increasing the role of women within the CEV and supporting women's volleyball were stressed as key projects by Pevkur.