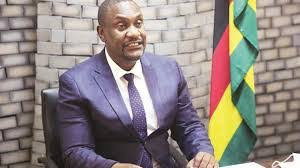 Ignatius Vambe, Zimbabwe's Chef de Mission for the Tokyo 2020 Paralympic Games, has stated the nation needs to step up its preparations for the event with qualifiers on the horizon.

The Paralympics were postponed to 2021 and are now scheduled to start on August 24 due to the COVID-19 pandemic.

Because of this move, qualifying events were also delayed and are set to be held in the early part of next year.

Vambe had a virtual meeting with the Zimbabwe National Paralympic Committee (ZNPC), discussing how they would proceed with preparations ahead of another meeting the Chef de Mission is set to be a part of with representatives from other countries on October 26.

Zimbabwe are still chasing qualification for the Games in Para athletics - a sport in which they have won their only Paralympic gold medals.

Due to the pandemic, the athletes have not been able to train as usual, but are now back to preparations and are hoping to attend some events early in 2021.

The ZNPC has shortlisted some athletes in powerlifting and athletics that they believe can make the Games, according to Zimbabwean publication The Herald.

Vambe said that the ZNPC now have to play a part in helping athletes find qualifying events, in a bid to break a medal drought that has lasted 16 years.

Zim's 1st gold🥇 at the Paralympics was won by Elliot mujaji in 2000 (Sydney), in the 100m sprint. 4years later he again won Zim's 2nd Paralympic 🥇 in the same event in Athens.#263Lad #Legend pic.twitter.com/apDNWXsJK9

"Now we need to step up our preparations, the Government has relaxed some of the conditions in terms of movement and opening up of some disciplines," said Vambe.

"So we plan to have training camps and keep our ears open for those competitions that will act as qualifiers.

"We are looking at starting camps as early as November.

"Unlike the Dubai event where we had limited time, I think this time we will have more time...so soon after the Chef de Mission meeting, we are definitely in competition mode.

"The good thing is Government is behind us, they have given us the go ahead in terms of funding, now what is left are the qualifiers."

Zimbabwe last won a Paralympic medal at Athens 2004, when Para-sprinter Elliot Mujaji claimed his second title in the men's 100 metres T46 after triumphing in the same event at Sydney 2000.

Prior to Zimbabwe's only Paralympic titles, there was another 16-year drought for medals, with nine silver and six bronze medals being won at the 1980 and 1984 Games.