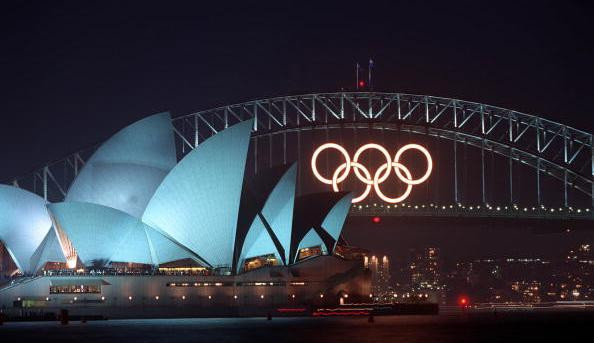 The iconic 35-ton set of steel Olympic Rings that lit up the Sydney Harbour Bridge during the 2000 Games, which closed 20-years-ago today, have been put up for sale on auction site eBay.

"The 2000 Sydney Olympic Games was the Olympics of a lifetime for Australia and the world, symbolising a time of courage, strength in community and true unity of the masses," read the item description, listed as being in Queensland and available for local pick up only.

"An event that even in the face of a global pandemic, continues to bring Australia together 20 years on #mySydney2000.

"The power of the 2000 Olympics is undeniable with the fireworks from the Closing Ceremony erupting from the Olympic Rings mounted on the Sydney Harbour Bridge a strong memory for all, both for our country and the world.

"While it is with regret that these Olympic Rings be placed back up for auction for the first time since 2015, we hope that a new home for them will mean they can be reassembled and visited to reignite the magic felt globally during the 2000 Sydney Olympics and also inspire budding Olympians for generations to come."

The Bridge Rings were one of the iconic sights of Sydney 2000.

Michael Payne, the former International Olympic Committee head of marketing, described how they came to fruition in his book, Olympic Turnaround: How the Olympic Games Stepped Back from the Brink of Extinction to Become the World's Best Known Brand.

Payne detailed the rings as made from 35 tons of steel and 75 metres wide and 35 metres high.

"Shortly after Sydney had been awarded the Games, Ric Birch, who had been appointed to produce the ceremonies, came up with the idea of placing a giant icon of the Olympic Rings on Sydney Harbour Bridge," Payne wrote in his book.

"[New South Wales Olympics Minister Michael] Knight decided that this would be an unnecessary extravagance, and repeatedly refused.

"Others though, believed that the idea had the potential to become the overriding image of the Games and kept quietly working away on the plans.

"By February 2000, it was clear that if Sydney did not take a decision on the Rings on the Bridge, it would be too late to undertake the manufacture.

"Knight was still refusing to allocate the budget and it looked like the idea was not going to happen.

"Either the International Olympic Committee (IOC) was going to have to 'volunteer to pay', or Knight would have to be 'tricked' into agreeing.

"The IOC Executive Board held its final meeting in Sydney prior to the Games in February 2000, and Knight reported to [IOC President Juan Antonio] Samaranch and the Board.

"I scribbled a note to Samaranch, telling him to read out the message, as part of his concluding remarks, at the end of Knight's presentation and after all the questions.

"Samaranch looked at me, asking what on earth this was all about.

"'Mr. Knight, I understand that you are considering applying the Olympic Rings to Sydney Harbour Bridge for the Games', said Samaranch, squinting at my handwriting, 'but are not sure if you need the IOC's approval.

"'I think it is an excellent idea and I am pleased to approve it.

At the time, the seller Bernard Maas said that a "fellow from Pyrmont in Sydney bought them".

To see the full listing on eBay click here.